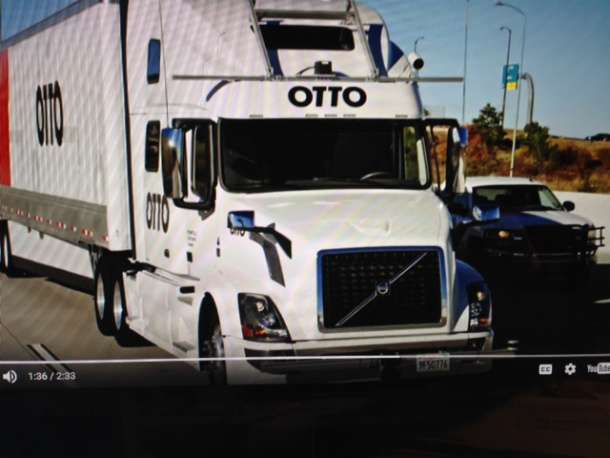 A truck company named Otto confirms that it has made its first delivery with a self-driving truck. Otto has teamed with Budweiser to make a beer run.
Advertisement

A truck company named Otto, announced today that it has completed a 120 mile beer delivery with a self-driving truck. Otto teamed with Budweiser to deliver 2000 cases of Budweiser beer. The beer was picked up from Anheuser-Busch in Fort Collins and delivered to Colorado Springs.

Otto says that the delivery took place on October 20, 2016 and that it is the first ever delivery by a self-driving truck. Otto posted a video of the truck driving through Denver, without a driver in the driver’s seat. According to information provided with the video, the driver was out of the driver’s seat for all 120 miles of the trip on I-25.

The video includes quotes of Anheuser-Busch representatives saying that a driver will always be involved, monitoring the loading and packing of the truck. The driver will be onboard the truck but does not have to be in the driver’s seat during the trip. The beer company says it is always looking for innovation in the delivery process.

As creepy as all of this sounds, The Colorado Department of Transportation was aware of the self-driving delivery and monitored the trip from start to finish. CDOT vehicles provided a convoy of sorts for the trip, in the event that there were problems. During the more than two-minute video posted on the Otto website, dozens of other vehicles were traveling alongside the semi truck as it made its way south on I-25. The video does not mention how many practice runs might have been made, with or without other traffic.

While self-driving vehicles may be inevitable in the future, I’m not sure how prudent it is to turn a huge semi loose on the freeway with other innocent drivers on the road. While the Colorado Department of Transportation was aware, they probably should have warned other drivers, in case of problems.
I worry about the shock value alone, if another driver passing the truck noticed that there was not anyone in the driver’s seat, there could easily have been accidents. It is a huge step for the self-driving technology that the trip was completed safely.

The Otto trucking company is teaming up with Uber to make the self-driving trucks available in the future. It would be nice if other drivers are aware of the testing and risks at the same time.

No word on when the self-driving vehicles can make beer runs for the average drinker.