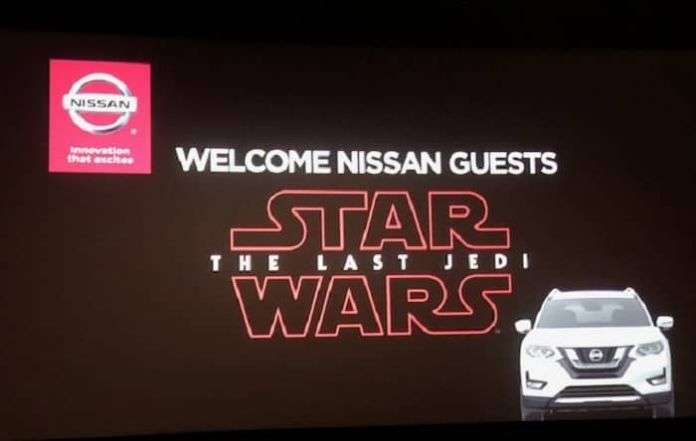 Everywhere you look, you see advertisements for Star Wars: The Last Jedi. Nissan is banking that the movie can rocket the company's sales into the stratosphere.
Advertisement

Nissan is banking on the Stars Wars: The Last Jedi to boost sales of not only its 2018 Rogue, but also its 2018 Titan and other models. Star Wars: The Last Jedi roared into theaters this week-end with the second largest U.S. opening box-office weekend in history, taking in $220 million. The movie wasn’t able to catch The Force Awakens which holds the domestic opening weekend box office record at $247 million.

Everywhere you look you will see advertisements that tie Nissan to The Last Jedi. Unlike the partnership that tied the Nissan Rogue to Rogue One, this time Nissan is using the partnership to advertise its full range of models. It is also promoting its Semi-Autonomous technology called ProPilot Assist.

The scale of the partnership was first displayed at the Los Angeles Auto Show. Nissan has fashioned a huge set for its upcoming 2018 vehicles and they are displayed alongside X-Wing Fighters and other Star Wars inspired futuristic vehicles.

Television ads position the 2018 Titan driving alongside Star Wars X-Wing fighters, touting its new ProPilot Assist technology that protects drivers while on the road. The ads are splashy, expensive and demand attention.

A spokesperson for Nissan says it is too early to know exactly how much the cross promotion will help sales but the last tie-in was deemed very successful. Wendy Orthman, who handles public relations as well as marketing questions with Nissan, says “Last year with Rogue One, the company broke sales records for November and December, and the new Rogue became America’s best-selling vehicle outside of pickup trucks. This November, sales were up 19% over last year so we are off to a similar start.” Another Nissan public relations person says that they are already seeing website traffic start to spike with all of the Star Wars: the Last Jedi promotions.

Promotion Not Tied to Product Placement

Unlike other cross promotion partnerships, Nissan vehicles are not featured in any aspect of the film. All of similarities are created in the advertisements, or in the special Star Wars inspired futuristic vehicles that will be displayed at special events and auto shows. Many of the theaters are featuring special Nissan displays. Nearly all of the Nissan dealers are expected to have Star Wars displays. It is a safe bet that the huge crowds who are attending the biggest movie of 2017 will at least notice the Nissan presence.

Star Wars has millions of fans, if the advertising convinces even a tiny percentage of those fans to buy their vehicles, sales would be astronomical.