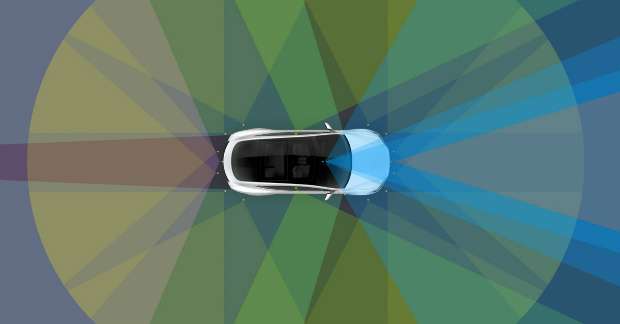 Elon Musk is promising that all of the vehicles that the company is currently producing will be equipped with the most advanced hardware available. The new package includes eight camera sensors and 12 ultrasonic sensors. The vehicles will not be self-driving right away.

Tesla intends to send the vehicles upgrades every two to three months, while the company works out the bugs in the system. “Hardware Two” will deactivate parts of Tesla’s controversial Autopilot software. Some customers have blamed the Autopilot program for accidents. Earlier this year, a Florida driver was killed when his Tesla slammed into a truck, while on Autopilot. Tesla has countered that some drivers don’t understand the limits of the autonomous driving systems.

In a statement on its website Tesla says “Eight surround cameras provide 360 degree visibility around the car at up to 250 meters of range. Twelve updated ultrasonic sensors complement this vision, allowing for detection of both hard and soft objects at nearly twice the distance of the prior system. A forward-facing radar with enhanced processing provides additional data about the world on a redundant wavelength, capable of seeing through heavy rain, fog, dust and even the car ahead.” The image Tesla provided on its website shows the vehicle with its camera and sensor range.

The company also claims that the system is controlled by a computer that is 40 times faster than the previous version. The "Hardware Two" will be available on the Model S, Model X and even the new Model 3.

It sounds as if Tesla will be monitoring the new “Hardware Two” in the new vehicles and consider the roll-out as real world testing. Because the “Hardware Two” will deactivate the Autopilot software, drivers will lose some of the current safety functions, but they will be added back in down the road. According to Tesla’s website, the drivers will temporarily lose “some standard safety features such as automatic emergency braking, collision warning, lane holding and active cruise control. As these features are robustly validated we will enable them over the air, together with a rapidly expanding set of entirely new features.”

Tesla’s decision to add in the self-driving hardware to all of its vehicles is an expensive gamble. Given how quickly the technology is changing, “Hardware Two” could be outdated as quickly as the “Autopilot” software. The Tesla announcement says that current vehicles will not be upgraded or retro-fitted. The option for the new technology will reportedly cost $8,000.

Tesla considers this a crucial step toward self-driving or autonomous vehicles. This move will force other automakers, especially luxury marques, to up their game. Most of the car companies are experimenting with the technology but Tesla is the first to aggressively build in the hardware, hoping the self-driving days arrive sooner rather than later.