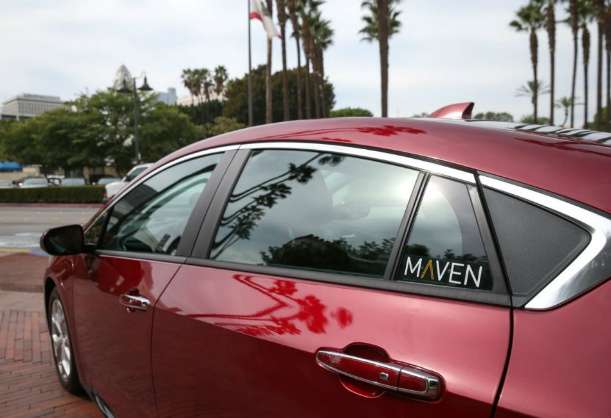 General Motors is taking its Maven car sharing program to Los Angeles. Maven members can rent cars for as little as $8 dollars an hour.
Advertisement

It is a move that may seem counter-intuitive to some, automakers encouraging potential drivers not to own cars. In reality, it is brilliant marketing that can encourage brand loyalty among drivers who are not yet ready or able to buy the vehicle of their dreams.

Starting now, Maven customers in L.A. will have a pool of 60 GM vehicles to choose from. They reserve the car or SUV through the Maven app and pick it up at one of 24 sites around the city. Prices start at $8 an hour, which includes the cost for insurance and fuel. Maven members do not have to pay to join.

In effect, GM is giving people a chance to test drive its most popular vehicles, in any given situation. The initial L.A. fleet will include the Chevrolet Cruze, Malibu, Tahoe and Volt, GMC Acadia and Yukon, and luxury Cadillacs such as the ATS, CTS, CT6, XT5 and Escalade.

According to GM, Maven rental sites will initially be located in downtown Los Angeles, Little Tokyo and South Park. There will also be locations near the University of Southern California including four cars at University Gateway Apartments.

Studies have repeatedly shown that millennials are more concerned about having a phone than a car. It is an odd point in history, when young people are no longer driven by the desire to get their driver’s licenses. In large cities, mass transit has expanded enough that many young professionals may not need a vehicle full-time. But everyone needs a vehicle at some point.

Maven and other car sharing programs give urban dwellers the opportunity to get that much needed transportation quickly and conveniently. Ford invested in Zipcar ages ago, targeting millennials in large cities and on college campuses who might need short term rentals. Car2Go and its fleet of tiny Smart cars are visible on city streets in places like Denver, San Diego and Austin.

The head of Maven, Julia Steyn, says, “Los Angeles is a natural fit for Maven because of the city’s incredible appetite for cars, we are excited to offer an elevated car sharing experience with seamless connectivity in a fleet of luxury sedans, electric vehicles, and SUVs.”

That is really the key. The people who use Maven don’t want to buy a car right now, but some day they may need to. If GM can keep them as customers and build brand loyalty, one day when they do buy, they may turn to the vehicles that they have already driven and enjoyed.

So far, Maven members on-average drive 100 miles and keep the vehicle 12 hours. The most popular vehicles in the program so far are the Chevrolet Malibu, Spark and Volt.