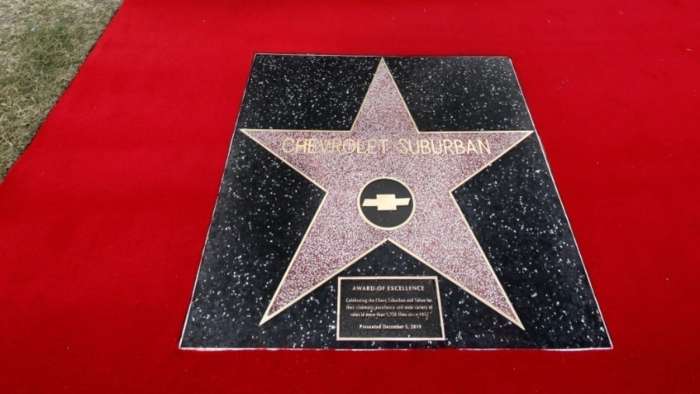 The Chevrolet Suburban has appeared in more than 1,750 film and TV series. The iconic vehicle now has its own star, from Hollywood, in a popular Texas entertainment district.
Advertisement

The old advertising slogan is “Baseball, Apple Pie and Chevrolet” but perhaps it should be “Appearing Now on a Screen Near You”. The 2021 Chevrolet Suburban is one of the most recognizable vehicles in the world. The Suburban has appeared in more than 1,750 movies and television series since 1952. It was the first vehicle to be honored with its own Hollywood Star, the Hollywood Chamber of Commerce Award of Excellence, in 2019. Now, that Hollywood Star is enshrined at a well-known Texas entertainment district.

The Hollywood Chamber of Commerce President accompanied the Star to its new home in the Arlington, Texas, entertainment district, which is located between the ballpark and the football stadium. The 2021 Chevrolet Suburban is built at the Arlington Assembly Plant.

“The Suburban is truly a staple in both Texas and Hollywood, and the city of Arlington is honored to play a role in recognizing the Suburban today and every day at the GM Arlington Assembly Plant,” Arlington Mayor Jeff Williams said. “We’re also proud to proclaim today, June 21, ‘Suburban Day’ to recognize the Suburban’s continuing legacy in Texas, Hollywood and around the world.”

“There is no other character actor like the Chevy Suburban. It can fit into any type of role with ease. When it arrives in a movie or TV series, it can instantly bring a feeling of significance, suspense or knowing the day is about to be saved,” said Hollywood Chamber of Commerce President Rana Ghadban. “This marks the first Award of Excellence star outside of California. We are excited to permanently place the Suburban’s Award of Excellence star in its home state of Texas.”