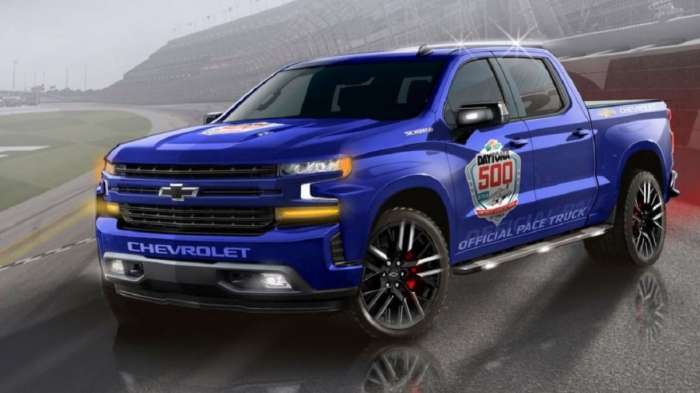 The 2019 Daytona 500 will bring back one of NASCAR's favorite drivers. Dale Earnhardt Jr. will be driving the 2019 Chevrolet Silverado as the pace vehicle.
Advertisement

The 2019 Daytona 500 will feature one of NASCAR’s favorite all-time drivers. Dale Earnhardt Jr. will pace the Great American Race in a whole new way. Junior will be driving the all-new 2019 Chevrolet Silverado. It will be the first time that a truck has acted as the pace vehicle.

Dale Earnhardt Jr. has won the Daytona 500 twice. He has also won the July race, in Daytona, twice. Earnhardt Jr. was voted NASCAR’s Most Popular Driver for 15 consecutive years.

Daytona Signals the Start of the Race Season

“I’ve had a lot of fun and a lot of success at Daytona over the years, and now I can’t wait to get out on that track in a Silverado,” said Earnhardt Jr. “Away from the track I’ve driven Chevy trucks all my life, and I’m excited to have this unique experience of pacing the Daytona 500 with the Silverado.”

“Dale Earnhardt Jr. was the perfect choice to pace the race because of his enthusiasm for the sport, his long history with Chevrolet and his love of trucks,” said Jim Campbell, Chevrolet U.S. vice president of Performance Vehicles and Motorsports. “It’ll be exciting to have Dale lead the field to green in the strongest, most advanced Silverado ever.”

Earnhardt Jr. said on Twitter, “I own this truck and it’s badass. Appreciate Chevy asking me to drive it at the #Daytona500 to celebrate what an awesome trick it is. Can’t wait to kick the new season off right.”

He followed that tweet up with this. “I’m guessing this is the truck. I bought a red one, but this one will do for the #DAYTONA500 in February. When Daytona called, I couldn’t pass up the chance to do this. Will be an adrenaline rush, not to mention Nascar will be back!!”

Earnhardt Jr. retired from racing fulltime, in 2017, after a number of concussions. He works as an analyst for NBC Sports covering motorsports. He also owns a NASCAR team, JR Motorsports.

The Daytona 500 is the first race of the season for the National Association for Stock Car Auto Racing. Known as the Great American Race, the race will kick off the 2019 season for the Monster Energy NASCAR Cup Series. It will be the 61st Daytona 500.

Earnhardt Jr. will be driving the all-new 2019 Chevrolet Silverado pace truck. It is powered by a production 6.2L V-8 engine paired with a 10-speed automatic transmission. It delivers 420 hp and 460 lb-ft of torque. This will be the first time a pickup has ever paced the Daytona 500 race. The 2019 Chevrolet Silverado is extremely important for Chevrolet as more consumers are gravitating toward trucks and SUVs.

Chevrolet has paced the Daytona 500 12 times, seven with Camaro and five with Corvette.

The Daytona track holds tremendous significance for the Earnhardt family. It has been the site of tremendous triumph and tragedy. Dale Jr’s father, Dale Earnhardt Sr., known as “The Intimidator” was killed driving in the Daytona 500 in 2001.