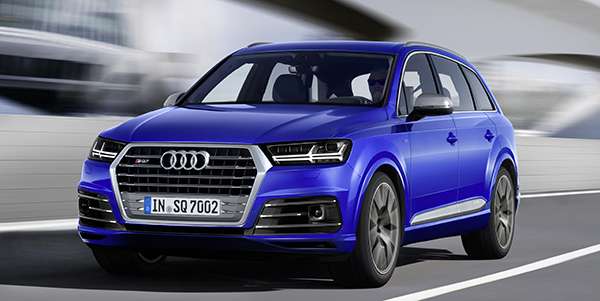 Audi Buffs Up the Q7

It seems Audi had a surprise for us after the Geneva Motor Show.
Advertisement

That surprise came in the form of a performance oriented Q7. Audi introduced the SQ7 TDI at their headquarters in Ingolstadt, Germany yesterday. The big story is what is under the hood, a 4.0L turbodiesel V8 with 435 horsepower and 664 pound-feet of torque. While that doesn't beat the last-generation Q7 V12 TDI (493 horsepower, 738 pound-feet), it does beat the current crop of luxury crossovers when equipped with a diesel engine.

But the story doesn't end there. To generate all of that power, Audi used two sequential turbochargers and an electrical compressor - a first for the industry. Turbocharged engines rely on exhaust gases to spool up and develop boost. But a problem arises when leaving a stop as the engine doesn't seem to have any oomph until a few seconds where a punch of power arrives. That is called turbo lag and it comes down to the engine not producing enough exhaust gases to get the turbos working.

That is where the electric compressor comes. The compressor is placed downstream of the intercooler where air flows in. A motor in it spins at 70,000 rpm and can boost pressure to the engine immediately. So when you are leaving a stop in a SQ7, you won't be feeling the effects of turbo lag.

The SQ7 is also fitted electromechanical active roll stabilization system. Comprised of a compact electric motor with a three-stage planetary gearbox and a set of stabilizer bars, the system can connect the bars to reduce body roll in sporty driving. On rough roads, the system disconnects the bars to provide a soft ride.

With all of these electric devices, Audi engineers realized a 12-Volt electrical system wasn't going to cut it. So they stepped up to a 48-Volt system to meet the demands of the various electrical devices.

Other changes for the SQ7 include new bumpers, 20-inch wheels, an adaptive air suspension with unique tuning, and LED headlights.

Audi says the SQ7 TDI will go on sale in Europe this spring. We don't know if Audi will bring the SQ7 to the U.S. or not. But if they are, we wouldn't be surprised if they swap the diesel for a gas engine.