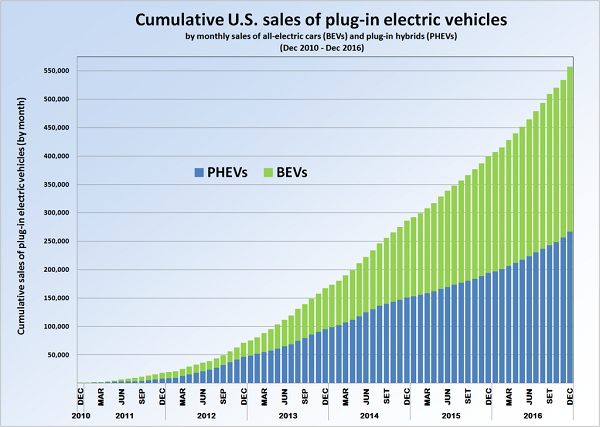 Will the 3 week High in Oil Prices Drive up EV Sales?

Recent reports about Chevy Bolt discounting and below expected sales rates are likely very premature. This week has seen the US Oil market reach three week highs in the Oil market on reports of below expected distillate inventories and gasoline supplies in the US.
Advertisement

Additionally Libyan disruptions have lead oil traders to push the West Texas Oil price higher. Actually to a three week high! I thought this was an Electric car article? You are right.

Are the EV Market and the Oil Market Linked?

At this point, I believe there is a synergistic relationship between increases in the Oil price and increases in electric car sales rates including the new market entry the GM Chevy Bolt! The underlying market for oil will inevitably cause consumers to further accept the opportunity to purchase a Chevy Bolt or other EV. Most consumers that are loyalists to gasoline will probably never switch to EV however there are others that have been waiting for the EV that will give them comparable range to a typical gas car.

Back in 2004 to 2009 the gas price rose to levels that had never been seen before in the US and I have always contended that this was one of the main reasons we ended up in a great recession. There were other reasons as well but the impact of the rising interest rates and oil prices was a perfect storm.

Back then since GM had killed the EV and never released it nationally there was no alternative for the American Public to run to. They could not trade in there Hummers for Prius cars fast enough.

Two out of the Big Three USA auto makers almost went out of existence back then! Do we have short term memory loss? What if the oil price and interest rates increased again? Well at least the interest rates rising doesn’t have as much of an effect on the housing market as the last time because there are less adjustable rate mortgages than there were back in the housing market heyday… at least I think there isn’t.

The Market Is Different Now With More EV Opportunities

So what if things are starting to repeat themselves? Interest rates rising, oil pricing rising? What does that hold for the future of Electric Cars? At this point in 2008, there were no EV choices except small conversion shops in various parts of the country that would take your old gas car and make it electric. That has all changed. Enter the Tesla S,3,X,Y Nissan Leaf, Chevy Bolt, Chevy Volt, Toyota Prius family, VW eGolf, Ford Focus EV, and many others. The market is different now and the opportunity to switch from gas to Electric as an alternative is readily available. Since 2008 the US market has sold over 500,000 units of EVs and PHEVs and if the gas price goes up there can only be one outcome. There will be more electric cars sold.