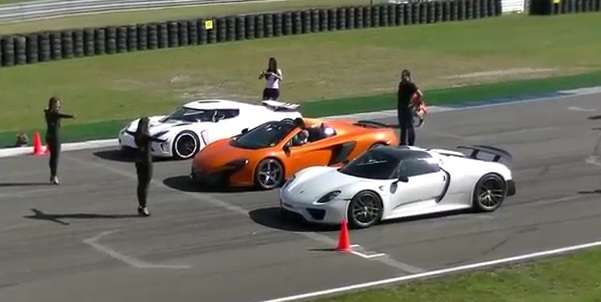 For many of us, winning the Power Ball seems more realistic than ever being able to witness just one of these cars in person. So when all three of them are spotted together, on the same track, drag racing, of course it is worth talking about. The combined value of all three cars is roughly $2.5 million U.S. dollars, and that doesn’t include the fact that you need to sign away your first born child, have a letter of recommendation from the Pope, and have Warren Buffet co-sign for you, just to get on the extremely short list of those that can actually receive one of these magnificent works of art.

Each of these vehicles is a modern marvel in its own way.

The Koeningsegg Agera R might be the most sophisticated car on the planet. It has, close to, the lowest drag of any car on the planet, which allows it to reach speeds of over 250 MPH. An adaptive rear wing that can adjust to head and tail winds to create massive amounts of downforce, to keep the vehicle firmly planted on the ground. It can also produce lateral G force 1.5G’s, thanks to state of the art balance, and tires that have been custom designed for it.

For the McLaren 650S, it is based off of the McLaren 12C chassis and utilizes a lot of the same components and technology. McLaren leans heavily on their Formula 1 racing experience in developing their street cars. The chassis and a lot of the body components are molded from carbon fiber, which helps it achieve an outstanding power-to-weight ratio.

Now obviously the true beauty of these cars isn’t going to be captured in a straight-line race. These supercars were designed for the twists and turns of a road course. Unfortunately, this will have to suffice for the time being. So turn up your speakers and enjoy 3,000 pulse pounding horsepower flying down the straightaway.