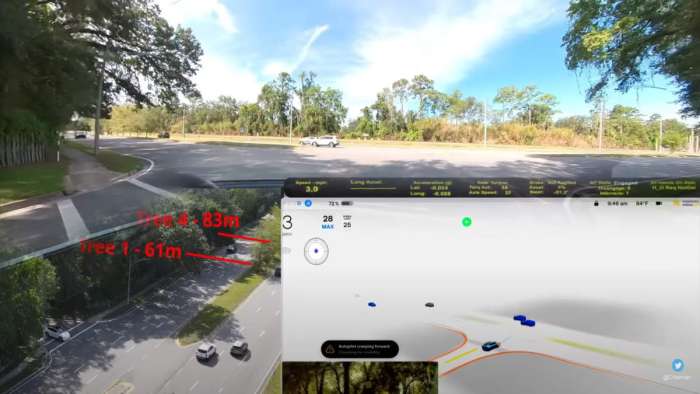 Tesla's FSD 10.13 release notes have been leaked and we see Chuck Cook being mentioned and that there are improvements in unprotected left hand turns!
Advertisement

We have the latest release notes from Tesla's FSD software, version 10.13 and there is a long list of updates, including the handling of Chuck Cook's complex unprotected left turn. Let's go over the release notes now.

- Improved decision making for unprotected left turns using better estimation of ego's interaction with other objects through the maneuver.

- Made speed profile more comfortable when creeping for visibility, to allow for smoother stops when protecting for potentially occluded objects.

- Enabled creeping for visibility at any intersection where objects might cross ego's path, regardless of presence of traffic controls.

- Improved lane position error of crossing and merging lanes by 22% by adding long-range skip connections and a more powerful trunk to the network architecture.

- Improved pedestrian and bicyclist velocity error by 17%, especially when ego is making a turn, by improving the onboard trajectory estimation used as input to the neural network.

- Improved animal detection recall by 34% and decreased false positives by 8% by doubling the size of the auto-labeled training set.

- Improved detection recall of far away crossing vehicles by 4% by tuning the loss function used during training and improving label quality.

- Improved the "is parked" attribute for vehicles by 5% by adding 20% more examples to the training set.

- Upgraded the occupancy network to detect dynamic objects and improved performance by adding a video module, tuning the loss function, and adding 37k new clips to the training set.

- Reduced false slowdowns around crosswalks by better classification of pedestrians and bicyclists as not intending to interact with ego.

He has done many videos of these turns and in this video explains what he's trying to test and how he thinks things should be when the car handles this turn, as well as doing a few of the turns. Either way, Chuck Cook is now famous as his name is in the Tesla FSD 10.13 release notes.

Elon Musk even Tweeted to Chuck Cook saying that the software should handle his unprotected left hand turn, proof that even Elon Musk is listening to those on Twitter.

Beta v11 hopefully end of next month, which just amounts to incorporating highway. Importance of “v11” has been reduced by all the 10.x releases. We’re already mostly at v11.

What do you think of the patch notes of version 10.13? Will FSD finally be able to do Chuck's left hand turn?