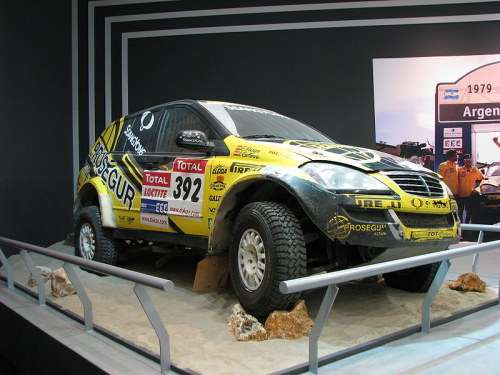 It wasn’t that long ago that GM announced how apps would be used by owners to communicate directly with their cars. Now, similar app technology will be used by VW to provide a social media connection to the sponsored cars in the 2011 race in South America.
Advertisement

According to paddocktalk.com , we're supposed to think of the app as a Volkswagen (official supplier) complementary gift to fans who will follow the 2011 Dakar Rally. Surprisingly, though, you may not find that information on the VW or the Apple websites even as late as this report.

For the record, this year’s desert classic is slated between January 1 through 16 per the Dakar Rally Official Website. Perhaps the app will be available then.

Regardless of when the app appears, fans and journalist alike will have the potential to be connected, as "Rally mobile" exploits the iPhone’s latest technologies and the iOS operating system and retrieves high definition text, pictures and videos onto the display about the Volkswagen factory involvement in South American race.

The application will provides news, results, background information and also multi-media content at the touch of a finger directly to the device.

According to the Dakar.com website, a few rule changes have occurred, which fans will be able to monitor. For example, on each special stage, the road-book includes several WPMs (hidden way points) which the competitors must approach in order to validate their passage. At the end of the stage, forgetting one or more WPMs will result in penalties.

Until last year, the competitors only had to be guided by their navigation instruments to within a radius of 3 km around the WPM to be considered as having passed it. Now, they will have to try to get within 800 meters of the WPM for the function on the GPS to be triggered.

While the race is open to amateur and professional entries, amateurs typically make up about eighty percent of the participants.

Here’s a direct link to a map for the 2011 route: Dakar Race Map