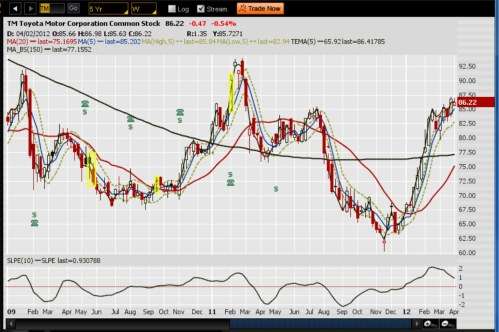 A few weeks ago I questioned when Toyota Motors (ADR: TM) stock would plow through the resistance level. It now looks like the upward trend bias is intact, whether the 2012 New York Auto Show agrees or not.
Advertisement

A few weeks ago, Toyota Motors (ADR: TM) stock was between a rock and a hard place; against strong upward resistance which had failed three times since last July, and two of the three times just recently. Nonetheless, I preferred to let the market tell me what’s it’s doing rather than me telling it what it should do.

I also noted at the time that the weekly swing low at 79.69 would be a great spot to watch and get in. Well, prices merely dipped to 82.97 before gapping upward. For the record, see the weekly chart provided.

To get a better view of the price dynamics, though, I also switched to the daily chart. It, too, showed a downward movement at the time. Furthermore, my own proprietary signal system that uses the crossover of the 7-period regression slope was below the zero line which indicated a sell. When I checked that same indicator today, the level was back above the zero line, indicating bullishness, at least short term.

Still, be apprised there is a serious price gap between 82.06 and 80.81; meaning, I would not be surprised if TM tested that level. However, there is now a higher daily chart gap between the 85.40 and 84.59 price levels.

Should we invest in Toyota stock?

Everyone knows that major auto events like the 2012 New York Auto Show have a positive effect on auto stock prices. So, perhaps a lot of the price fluff is coming from that. Then again, perhaps there’s more to it than that; and that is precisely why we must watch both the fundamentals and the price action.

In addition, my other chart system that uses T.D. Ameritrade’s ThinkorSwim platform had the ATR stop level tested on the 3/23 close. If TM had closed below 83.34 the following Monday, then that ATR stop would have been confirmed; and a sell bias would have been in place. Instead, the price jumped that Monday and has yet to look back.

Today’s close at 86.46 has TM stock in a strong bullish condition with the ATR stop raised to 84.63. That will remain in place unless broken or if the price closes above 87.15.

Now, I was hoping to sell a put option for income before I had to leave for jury duty. Well, the stock gapped up and the put option was never filled; and, yes, I did get picked for jury duty; and it's me and Judi's 41st anniversary.

Since neither came to fruition, my next strategy is to wait for another pullback scenario, as I prefer buying wholesale as opposed to retail. The high 84.26 on 3/26 looks like a logical level, as it is the bottom of the next lower gap. The strike option could be the April 82.5 Put, but time is running out; better yet, decaying.

With the New York Auto Show coming into focus, though, the pullback that I hope for may have to be delayed. Fighting the PR of auto shows is akin in my book to fighting the Federal Reserve; not a good idea. So patience will be in order once again. Besides, it’s hard to watch the markets inside a jury room.

Tell me what you think about a good target for Toyota stock.

LG's New EV Battery Plant Is a Welcome News for Tesla
Tesla Giga Berlin's New Hurdle: It's Not Only the Gov't, but Now Tesla Itself
END_OF_DOCUMENT_TOKEN_TO_BE_REPLACED