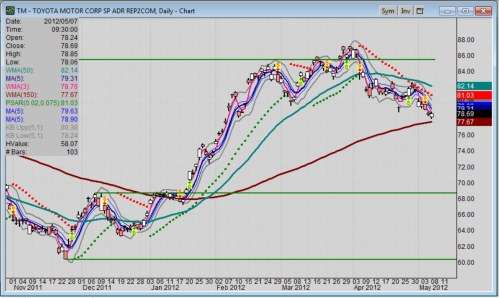 Toyota Motors (ADR: TM) may have announced pricing of its new RAV4 EV, but Toyota stock is still slumping along with the rest of the auto sector.
Advertisement

Many weeks ago I questioned when Toyota Motors (ADR: TM) stock would plow through the resistance level. That has now changed toward when a test of lower support levels will bring in buyers.

Fact is, the entire auto sector looks similar in their charts. All have peeked weeks ago and are now testing and breaking support levels. In the case of Toyota stock, the 150 day weighted moving average (WMA-150) is surely being tested; and the shorter WMA-50 has already been broken, while the slope of the average line has turned down and converging toward the WMA-150. No matter how you slice it, Toyota stock traders are not in a bullish mood.

Actually, the company behind the stock is fine. On the other hand, where TM was gapping upward for many months, that trend bias has now turned negative; and seems to be staying there.

Now, from a product viewpoint, Toyota looks to be in good shape, especially after its long recovery from last year when the earthquake and tsunami took its toll.

Right now TM is trading at 78.69 based on Monday’s close. One look at the daily chart, though and two elements really pop out. The first is the overhead resistance above the 85 level. The second is the WMA-150 (dark red line) at 77.67. However, look lower and you will see a large gap toward the next lower level of support, 68.64; which is really past broken resistance.

Is there a moral to this story? Yes, watch the price action and let the price dynamics tell you when and where to act.

On the product side, Toyota has shown well at every major auto show, including the 2012 NAIAS in Detroit. The latest news about that RAV4 EV may make a nifty headline, though, but the price of $48,900 will surely limit its sales except for the rich who do not need a government subsidy.

Now, before you get on a high horse and condemn my attitude, just be apprised that the first adopters of the automobile itself never got a single dime of government money. I rest my case on that part

Still, do not get this wrong. I applaud TM for the effort, and its working with Tesla Motors (Nasdaq: TSLA) on this one. Nonetheless, the high price has once again trumped common sense, and has once again stiffed those attempting to find jobs and affordable, green transportation..

Think about it. EVs may not use gasoline, but the cost of the upfront investment also means a very long payback. Of course, those with the cash think nothing of the investment; they want to be on the side of notoriety. But when it comes to providing transportation that all can afford, Toyota is missing the mark. They should likely stick with lower cost hybrids for the masses.

Back to TM Stock

Point is, where TM once played by its own rules as with the Prius, TM is now playing the same game all those other automakers are making. Instead of pledging their efforts toward lighter-weight auto bodies of larger vehicles or an expansion of more efficient IC engines that would serve everyone, they opt for the politically correct technologies with their expedient media hype machines.

I’ll have more to say about halo car mania in my next article.

When the market tips its hand that stocks are going lower, though, there is nothing on the table of common sense to award TM anymore premium, in my judgment. It already has a premium relative to Ford and GM, and it doesn’t deserve any more. So, it will pay the same price that all bearish markets expect. Their price will go down until it stops at a point where buyers come back in.

Your guess and timing of that event is as good as mine; perhaps better. The price dynamics, nonetheless, are the only real truth that we can really count on. So, pay attention to support levels; and look for a change in trend bias, not prophecies from talking heads.