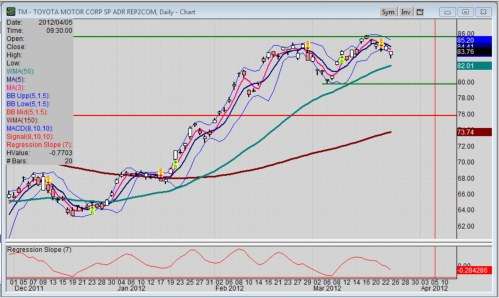 Stocks do not go up perpetually; and upside price resistance for Toyota Motors (ADR: TM) is just one reason the stock backed off last week. Question is, when will Toyota stock plow through the resistance level?
Advertisement

Last time I wrote, I noted Toyota Motors (ADR: TM) stock had put in a major low in late November of 2011, and since that time had experienced a full-blown, bull-market swing. Then came the translated CNN documents which implied the unintended acceleration was a known entity.

Point is, that CNN news may have had some effect, but the general market pulled back last week as well. And if you’ve been following the market at all, you would agree that TM, like other auto stocks, usually go in the direction of the general trend bias of the major market.

On the support side, the major low of 60.37 is firmly old news. The next higher up support would be the broken support of 75.85 and the level to watch. And the next level of support is the recent swing low of 79.69.

Is it wise to buy TM at the level of Friday’s close?

Frankly, I could say that I’m not sure; but looking at the chart for the answer, my first inclination would be to wait for the weekly pullback to complete its story.

Think about it. Toyota stock is between a strong upward resistance which has failed three times since last July, and two of the three times just recently. Point is, there is a reason that buyers are not buying through that level. And I prefer the market tell me what’s it’s doing rather than me telling it what it should do; as if that ever worked!

Now that recent weekly swing low at 79.69 would be a great spot to watch and get in. So, to get a better view of the price dynamics, I switch to the daily chart. It, too, shows a downward movement for the past week. My own proprietary signal system that uses the crossover of the 7-period regression slope below the zero line indicates a sell, at least for the time being.

That tells me to be patient and wait, rather than trying to pick a bottom swing point. Be apprised there is a serious price gap between 82.06 and 80.81. I would not be surprised if TM tested that level.

In addition, my other chart system that uses T.D. Ameritrade’s ThinkorSwim platform has the ATR stop level being tested on Friday’s close. If TM closes below 83.34 on Monday, then that ATR stop will be confirmed; and a sell bias would be in place.

Regarding the overall trend bias of the daily chart, though, the WMA-50 is above the WMA-150. These are weighted moving averages that I prefer to watch. Bottom line is, the daily trend bias is long for TM. The ATR stop is merely a swing method, but it is faster, in my opinion.

That, however, does not mean you should immediately buy or go heavy short. It merely says the bias as defined by the WMA favors the long side; and this recent pullback is providing the opportunity to get in at wholesale prices rather than retail.

I might consider selling an April 80 Put option for .80 as income. That way, I will get paid to wait for TM to come down to my target level nearer to support at 79.69. Yes, it’s a trader mentality, but if TM goes lower by April expiration, I will buy TM at the strike price, but my breakeven will be lower by the premium that I will receive. In other words, my breakeven will be lowered to 79.20.

When it comes to selling naked put options, you must realize that this is a bullish strategy. And unfortunately, premiums are not that high, because volatility is relatively low. If it was higher, I would opt for the 77.5 Put which is only now trading at .39.

Come to think of it, it’s only Sunday night. According to the Sunday evening report on MarketWatch, Asian stocks which are already open for Monday trading are posting mild gains as I write, with commodity firms and Japanese exporters among the gainers.

Still, I’ll wait for Monday’s price action in New York to make a decision. Unfortuantely, my head keeps telling me that I can’t wait too long, as I have jury duty on Wednesday. However, let’s hope I override that impulse with patience. Selling that 80 Put option at that gap I mentioned earlier would bring in a greater premium and lower my breaken point even more.