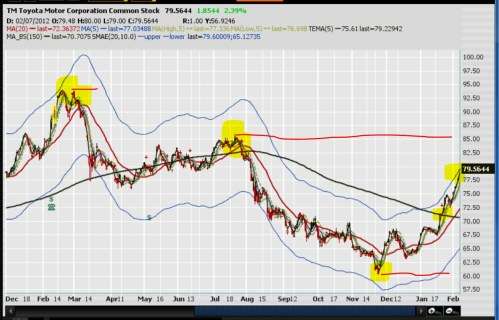 Despite a slip in profits, Toyota Motor Corp. (ADR: TM) gapped upward in New York trading this morning in direct response to the positive, forward-looking statements. The stock opened at 79.48, up from its Monday close of 77.71.

Despite the yen's strength lately which is severely pressuring exports from Japan, and a slow production recovery from severe flooding in Thailand, plus the earthquake and tsunami in Japan, Toyota Motor Corp. (ADR: TM) raised its net profit outlook to Y200 billion from Y180 billion.

For the record, not all is well with the numbers in comparison to the old days, though. That net profit outlook is still 51% lower than the year before all the natural disasters, but the trend in the stock proves traders see a positive future.

Last time I wrote, Toyota Motors (ADR: TM) stock had just broken above a major down-trend line, and the company had just ended its great showing at the NAIAS 2012 in Detroit.

Putting this into perspective, though, most auto sectors stocks seemed to show the same wedge or overhead resistance pattern being broken. Important for Toyota stock traders, was that price dynamics, not only confirmed the breakout to the upside, but that the upward move was sufficient to say the bottom was in.

Establishing a 52-week low just a few months ago, Toyota stock price dynamics showed the company was being perceived as recovering from the negative effects of the earthquake and tsunami in Japan last year, and the floods at plants in Indonesia. While that appears to still be in play, this recent forward-looking statement puts a more fundamental gusset under the floor.

Looking at the price-time chart, it looks like the next resistance level is 85.49. The major swing resistance at 69.81 that I mentioned last time is now officially broken and can act as support, but that has been replaced by pauses on the this latest bull swing, also known in wave theory as an impulse wave. Alos note the 20-period moving average has been rising for a few months now

The major swing support at the new 52-week low of 60.37 of 11/23 defines the bottom for this wave set; unless another black swan event enters the picture. Now I find TM sitting well above that broken resistance level of 74.43; and it looks firm at this juncture.

So, major resistance still stands at 85.49 and 93.90, the high of last February 2011, just before the earthquake and tsunami. While that may be far away, fact is TM stock is moving in chunks with multiple gaps in the daily price bars.

For the record, I do not own Toyota stock as of this writing, but am considering selling a put option for income or buying a call option if the price is right and the pattern agrees like a pullback. Problem is, TM has not been filling any up-side gaps lately.