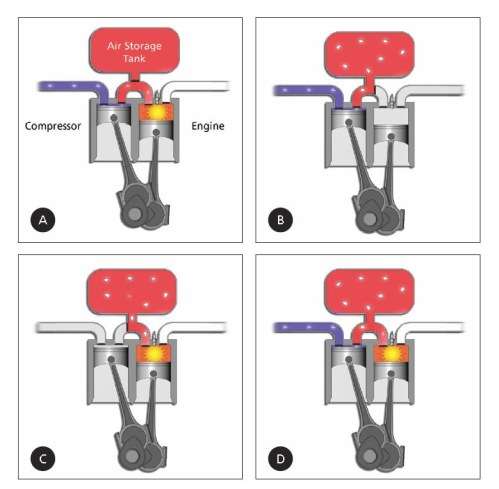 Tech papers to be released at SAE World Congress Expo to reveal new advantages which will create a potential challenge to EVs based on the functionality of the Miller Cycle and an air-hybrid option.
Advertisement

According to the news release by Scuderi engine, the patent application is titled "Turbocharged Downsized Compression Cylinder For A Split-Cycle Engine", and has been assigned USPTO publication number US-2012-007351 and WIPO publication number WO-2012/040431.

The patent application relates to a turbocharged split-cycle engine that divides the four strokes of a conventional Otto cycle engine over two paired cylinders; one cold, the other hot. The cold cylinder, called the "compressor", does the intake and compression strokes, while the other hot cylinder, called the "expander", does the expansion (or power) and exhaust strokes.

The compressor and expander are connected by a specially-designed crossover port to enable the transfer of compressed gas. In a split-cycle engine, each of the four strokes is completed in one revolution of the crankshaft, as opposed to the four strokes requiring two revolutions in a conventional engine. The split-cycle engine requires the same number of cylinders as a conventional engine, but the compressor and expander cylinders must be equally paired.

Most important, though is the mention of the Miller Cycle. Miller Cycle operation of any reciprocating internal combustion engine, whether the engine is split-cycle or conventional, necessitates the engine be configured in such a way that the gas is expanded more during the expansion stroke than it is compressed during the compression stroke. That is the telltale sign.

Accordingly, gas will be over-expanded during the expansion stroke, resulting in a significant increase in efficiency. In a conventional engine, Miller operation is typically accomplished through early or late intake valve closing, which detrimentally reduces volumetric efficiency and increases pumping losses across the intake valves. In this writer’s opinion, this reads quite similar to the operation of the Toyota engines which primarily resemble the Atkinson cycle but get higher mileage at the expense of power. Refer to the Prius engine, for example.

This detriment is negated in a split-cycle engine, such as the SCUDERI™ Split-Cycle Engine, as Miller Cycle operation may be achieved by physically reducing the compressor displacement relative to the expander displacement.

"Applying the Miller Cycle to the SCUDERI Split-Cycle Engine is significant because it gives a split-cycle engine a significant advantage over a conventional engine when it comes to operating the Miller Cycle," said Stephen Scuderi, vice president and patent attorney at Scuderi Group. "In this configuration, the compression cylinder can always run at or near maximum volumetric efficiency no matter how much it is downsized relative to the expansion cylinder; and achieving maximum volumetric efficiency keeps pumping losses across the intake valves to a minimum."

This writer expects to see more on this later this month at the 2012 SAE World congress in Detroit. The news release indicated a technical paper focusing on the Miller Cycle as applied to split-cycle technology will be presented there between April 24-26. The paper is titled "Miller Cycle Application to the SCUDERI Split Cycle Engine (by Downsizing the Compressor Cylinder)" (SAE paper number 2012-01-0419). It may be downloaded at http://papers.sae.org/2012-01-0419.

Also to be presented at the 2012 SAE World Congress is a paper titled "SCUDERI Split Cycle Engine: Air Hybrid Vehicle Powertrain Simulation Study" (SAE paper number 2012-01-1013). It, too, may be obtained at http://papers.sae.org/2012-01-1013. This paper describes the results and full methodology of Scuderi Group's recently released findings from a comprehensive computer simulation study predicting the performance of a computer modeled, Scuderi-powered vehicle.

The study also compared the predicted performance of the Scuderi-powered vehicle to a representative group of top selling European "high economy" vehicles. The results showed the Scuderi-powered vehicle to be a full 25 percent more efficient than the average of the European vehicle group and 13 percent more efficient than the best in class of the group.

In addition to the technical papers, Scuderi Group will also be discussing the engine's energy storage capabilities during the SAE World Congress Expo.

Tesla Giga Berlin's New Hurdle: It's Not Only the Gov't, but Now Tesla Itself
Teslas Are Sold Out Until 2023, But The Timing May Reverse
END_OF_DOCUMENT_TOKEN_TO_BE_REPLACED