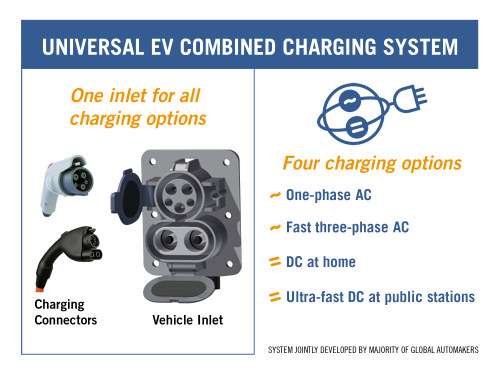 SAE International is playing a key roll in bringing together global automakers to agree on a single yet compatible fast-charging system for EVs that can charge in 15-20 minutes.
Advertisement

Unlike Washington politics where universal acceptance and consensus appear to be an oxymoron, SAE International is playing a key roll in bringing together global automakers, especially American and European standards committees, to agree on a single yet compatible fast-charging system for EVs.

For the record, the International Society of Automotive Engineers (SAE) has chosen the Combined Charging System as the fast-charging methodology for a standard that incrementally extends the existing Type 1-based AC charging. This allows for all four charging options, including the following: 120VAC; 220VAC; DC at Home; Ultra-Fast DC at Public Charging Stations.

Now, global automakers from the United States and Germany will demonstrate fast-charging technology, with live-charging demonstrations conducted during the Electric Vehicle Symposium 26 (EVS26) May 6-9. Behind the scenes, though, the International Society of Automotive Engineers (SAE) has done more than just choose the Combined Charging System, it builds global consensus on what already is working and acceptable.

It was just about a week ago that the SAE World Congress 2012 met in Detroit’s Cobo Center. While there were plenty of charging stations, including the wireless system displayed by Delphi (Read: Delphi Go Wireless EV charger in full regalia at SAE World Congress ), it seems the best news was being held in reserve for the Electric Vehicle Symposium.

Fact is, without the standards publication power of SAE, the automakers will likely follow similar but diverging paths, much like Washington politics, in my opinion; and that would not be good the budding EV industry.

Also for the record, I worked in the GM studio at the time the first Type-1 plug was being developed. It was obvious then the need for a common plug was as great as it was to fill tanks with gasoline; especially when diesel was also available, and confusion could have reigned. Imagine putting the wrong fuel into a vehicle.

In this case, the problem of fuel is measured in terms of voltage and time to charge. For example, the Type-1 plug that was approved handles 120V and 220V, but single phase AC. Since many EVs require 6-8 hours, we knew that faster charging required 3-phase power which does not exist in residential areas, but does exist in zoned commercial areas. Thus, it also requires a unique plug. It is the voltages that would be considered dangerous, though.

So far, Audi, BMW, Chrysler, Daimler, Ford, General Motors, Porsche and Volkswagen have agreed to support a harmonized single-port fast charging approach – called DC Fast Charging with a Combined Charging System – for use on electric vehicles in Europe and the United States.

The standard thus far agreed upon is to be officially published this summer. ACEA, the European association of vehicle manufacturers has also selected the Combined Charging System as its AC/DC charging interface for all new vehicle types in Europe beginning in 2017.

The charging system design was based on collaborative reviews and analysis of existing charging strategies, the ergonomics of the connector and preferences of U.S. and European customers. The system was developed for all international vehicle markets and creates a uniform standard with identical electrical systems, charge controllers, package dimensions and safety mechanisms.

According the most recent GM news release, the system maximizes capability for integration with future smart grid developments through common broadband communication methods regardless of the global location of the charging system. The combined charging approach will reduce development and infrastructure complexity, improve charging reliability, reduce the total cost-of-ownership for end customers and provide low maintenance costs.

While commercially available combined charging units are projected to be available later this year, all committed OEMs have vehicles in development which will use the Combined Charging System. The first vehicles to use this system will reach the market in 2013.

Yes, the EV world is coming together. Now if the industry could only come togetther on lighter-weight body structures and lower-cost batteries as a means to get total vehicle costs down so the masses could readily afford it.

Frank Sherosky wrote on May 7, 2012 - 12:15am Permalink
Afterthought: Upon further investigation of the plug design and its featured options, I think the EV world may be underestimating the degree of win this single plug design achieves for the electrification of the automobile and the industry.
Robert Weekley wrote on June 24, 2012 - 1:07pm Permalink
Between this Plug for direct connection, and the new starting offers of Wireless charging - the charging time, and the issue of forgetting to charge may soon become minor issues, as well! Imagine - if your home had one plug type socket that could accept anything from a small two prong lamp plug, up to a dryer or a stove! While that is not really need at a home, this idea is functionally like that! One socket - many plug applications!