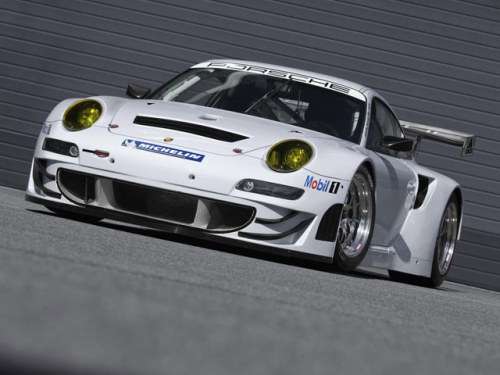 According to the latest news out of Stuttgart, Germany, the top model of Porsche Motorsport's customer racing vehicles, the 911 GT3 RSR will head into the 2012 season with extensive modifications. Porsche also unveield 911 GT3 RSR's U.S. price.
Advertisement

Bottom line for race enthusiasts is, the new Porsche 911 GT3 RSR is ready to race, heading into the 2012 season with extensive modifications. At first glance, you will notice the changes to the body. For example, the width of the new GT3 RSR has grown by 48 millimeters.

While the photos at the Porsche website do not really reveal this vehicle for 2012, at least easily, other areas like Facebook and Porsche links make finding the photos a real challenge; especially if you're trying hard not to steal anything. Key to telling the difference is the air inlet just ahead of the rear wheels.

With the diameter of the front wheels increasing by 30 mm to measure 680 millimeters, the nose and rear panels are adapted to the flared front and rear wheel arches, as are the door sill and the wheel arch coverings. The aerodynamic concept is complemented by a new ducting of the intake air.

Openings in the rear side sections, which are known from the turbo variants of the Porsche 911, replace the air scoop on the engine hood. This is very similar to the 911 GT2 RS street sports car.

Powering the new 911 GT3 RSR is a particularly efficient six-cylinder boxer engine with a four-liter capacity. With a mandatory air-restrictor, it generates 460 hp (338 kW) and drives the 310 millimeter wide rear wheels. The Porsche sequential six-speed gearbox is operated via paddle shifts on the steering wheel.

Built to conform to the A.C.O. "LM" GTE regulations, the 911 represents the crowning pinnacle of a range of successful customer sport race cars that are based on the 997 type 911 GT3 RS street sports car.

The new 911 GT3 RSR can be raced at the Le Mans 24 Hours, the FIA World Endurance Championship, the Le Mans Series, the American Le Mans Series as well as the International GT Open and in other series and races.

"Our customer teams can expect a technically mature, high performance race car with which they will be highly competitive at international long distance races," assures Hartmut Kristen, Head of Porsche Motorsport. "Our test program on various international race tracks is currently running at full speed. We are very pleased with the car's performance and drivability."

The new Porsche 911 GT3 RSR will be delivered to customer squads around the world from January 2012. The selling price is 498,000 Euro plus value added tax of the respective countries. "US pricing will be $533,000 plus options," Porsche's Media Relations Manager Dave Engelman wrote to Torque News in an email. Question is, is anyone willing to wait for the euro to devalue to get a better currency conversion?