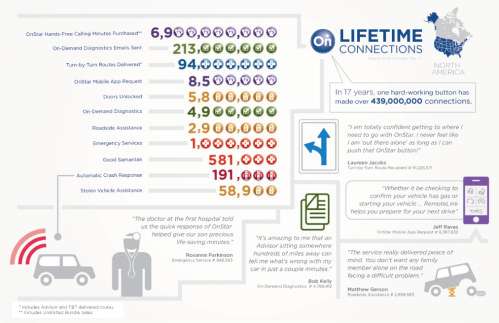 OnStar up to 439 million connections and still counting

Last time I reported on OnStar, the service helped recover a GM competitor’s stolen vehicle, a Chrysler 300. Now, the company is making new records on the number of connections.
Advertisement

Few realize that OnStar was originally developed as an airbag deployment notification system on three 1997 Cadillac models. Since then, OnStar has evolved to offer unmatched safety and security services. Today, for example, OnStar also provides everyday services like Turn-by-Turn Navigation, Hands-Free Calling and the RemoteLink Mobile App, leading to more than 439 million interactions – and counting.

According to the latest GM news release, over the last 16 years, OnStar has assisted in 191,000 Automatic Crash Response calls. Here are some other numbers contributing to the gaudy statistic:

So, what’s in a number or two? Point is, OnStar has become an integral part of the automotive connectivity scheme for General Motors (NYSE: GM). Yet, the company has been able to extend itself beyond GM products, especially since OnStar FMV became the company’s new aftermarket system.

Recall an earlier GM news release, on Dec. 18, OnStar subscriber Jean Franklin of Gresham, Ore., used OnStar to help facilitate the recovery of her stolen 2006 Chrysler 300. Franklin first called OnStar to report her stolen vehicle around 7:30 a.m. on a Sunday. After OnStar provided the Gresham Police Department with the vehicle’s location, officers were able to pull over the car and had the suspect in custody within 64 minutes of the original call.

OnStar FMV, which means “For My Vehicle,” comes standard with Stolen Vehicle Assistance, a security feature that allows OnStar Advisors to use the product’s internal GPS to pinpoint the location of a stolen vehicle that has been reported to authorities.

“The stolen vehicle feature is the reason I purchased [OnStar FMV],” said Franklin. “My car had been stolen before, so the police recommended I get it. I am much more comfortable now that the car has OnStar.”

Bottom line is, OnStar makes a difference for an increasing number of car owners. OnStar, a wholly owned subsidiary of General Motors, is thus the global leading provider of connected safety, security and mobility solutions and advanced information technology. With more than 6 million subscribers in the U.S, Canada and China, OnStar is currently available on more than 45 MY 2012 GM models, as well as available for installation on most other vehicles already on the road with OnStar FMV.