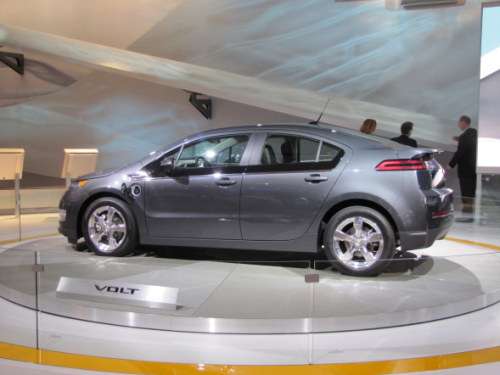 The auto industry may be embracing the age of electrification, but the media still doesn’t fully understand it yet, including descriptions within Ward’s 10 Best Engines list.
Advertisement

Two electric drive propulsions made the list this year, the Nissan Leaf and the Chevy Volt. Although the Volt made the list for its unique Voltec propulsion system, the description by Ward’s and others about the technology fell a bit short on accuracy and could mislead readers.

The Leaf is simple to describe; it’s fully electric but with a limited driving range. The Chevy Volt, on the other hand, has a gasoline generator engine attached which acts as a driving range extender.

It is the nature of this range extension system that has readers and writers scratching their heads at times.

In reality, the generator engine could be swapped for a fuel cell or a steam engine. The real issue is over what directly drives the wheels, a gasoline engine or an electric motor.

The Volt has an electric motor similar to the Leaf. Furthermore, it drives the wheels at all times. Problem is, many in the press still want to equate the ICE driven generator of the Volt as an atypical hybrid, when it’s not. Just the mere presence of the ICE seems to imply a non-electric drive hybrid, when that is not the case at all.

Besides, if the Volt was a like any other hybrid, then why did it make the Ward's list at all?

Read what Ward’s wrote: The “Voltec” propulsion system is brilliant – a technological masterpiece. I say few engineers would disagree.

Unfortunately, despite the honor placed, Ward’s, with all respect, in part still misrepresented the technology a bit with the following:

It plugs into a 120V wall socket and charges in 10 hours, or four hours on a dedicated 240V charger. Depending on several factors, the range will last anywhere from 25 to 40 miles (40 to 64 km), at which point an 84-hp 1.4L 4-cyl. engine imperceptibly kicks on to spin a generator that continues turning the wheels. (Underline emphasis is mine)

True in part, but through a single electric motor which turns the wheels. And since when does any generator turn wheels?

Am I being picky on words here? Perhaps, but I came from a place where details were extremely important. Those last words in the Ward’s description could be misconstrued by the public. And that's what caught my attention. With all the new tech info hitting the public, the last thing we need is inaccuracy or ambiguity.

The Volt never, ever drives the wheels directly with its ICE. The Volt merely uses the ICE as a power source to turn the generator, which in turn recharges the lithium-ion batteries and powers the electric motor which turns the wheels of the Chevy Volt.

Here's GM's own words from its media site: The Volt’s 344 miles of extended range comes from the highly refined, 1.4L, 63-kW (84 hp) gasoline-powered engine that provides power to the electric motors. (Again, my emphasis)

Elsewhere, they wrote, The Voltec’s propulsion system consists of three main components – a long-life battery, a 1.4-liter, range-extending engine and an electric drive unit to deliver power to the wheels.

That makes the Chevy Volt in a class all by itself. You can call it a hybrid, but it functions totally different in that its propulsion drive is fully electric. That is why the Voltec propulsion system deserves to be on the Ward’s 10 Best list. Nonetheless, the public would be better served if the media chose its words very carefully these days, especially when describing this masterpiece or any other technology.