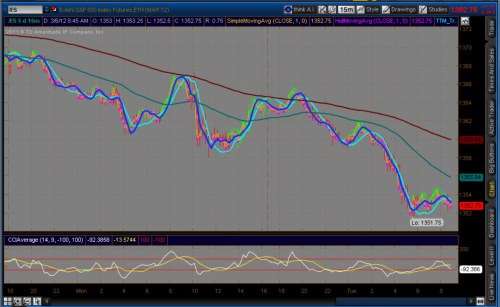 Yes, it is March; it is time for March Madness basketball, but it is also time for the multiple, quarterly option expiration event. Question is, will you, your auto stocks and/or your portfolio be robust enough to handle the volatility of the stock market's reaction?
Advertisement

Already by mid-morning, MarketWatch.com reports the Dow futures had lost over 100 points. The S&P 500 futures represented here by /ES shows a similar downdraft. And all this right in the early morning hours after I just finished editing this opinion piece and went to bed. So, one hour before the opening bell in New York, I release this rare opinion piece, even sticking my neck out and risking an ego deflation if it comes to nought. Better to be awake, though, than sleeping or looking like a deer into headlights.

Now, whether you invest or do not invest in the auto sector is immaterial if the futures market is involved. That means any investing position is fair game this month. So, forget about the predictions of Laszlo Birinyi for a moment that says the S&P will rise to 1700 by year’s end. Forget that he said to CNBC that we may get a 3-4% GDP. We may get all of those things and more, but we have to get through March option expiration, a man-made event, first.

Albeit a very smart and respected analyst, Birinyi’s position is one of many talking-head positions on CNBC. Now listen to a simple heart position and a trader position, and be armed so as to make up your own mind.

Especially learn the lesson about option expirations and the havoc they can play on your emotions and your portfolio. It’s even more important in this month of March, because there are more than just stock options expiring.

Another fact is, the situation in Europe is not helping; neither is the saber rattling between America, Iran and Israel; and Russia and China are not helping. And we still do not have an answer on how to protect against another flash crash event.

I seldom if ever make predictions here at TorqueNews; having avoided it like the plague. I usually take news items about a company or an economic factor, then give a technical analysis of support and resistance levels that will likely be in play if the market makes the news accurate. That means technical analysis of stock charts have been my forte.

Last night, I just couldn't seem to shake off this queasy feeling, though, that the market is going to seriously tank before it goes up; and I mean a healthy shakeout. And since I think in terms of probabilities (at least I try), I think there is a strong possibility that this market with a massive option expiration will have a lot to say this month.

I hope I am wrong; I could be wrong, but the longer this bull run (if you call it that) goes, the more nervous I feel. I took a bath, at least so far, on my put options for the SPY; meaning, this is not a new position for me; I felt this way last month; and even stronger now, albeit the profit for my position is not there. Then again, this month’s options have not expired yet.

I guess it comes from so many years of looking at charts and patterns of the price dynamics. After a while, no matter how much you hear a position being touted on CNBC, the experience of all that chart observance comes out in a form called intuition. And every time I ignored it, I seemed to pay a price.

Women far more excel than men in this area; but in this case, I have learned to respect the power of the market and the human mind with its ability to translate raw data into a plausibility; and to use the emotions to communicate that plausibility into terms of probability to our brains.

That philosophy is not new for me either. It showed up in my book, “Awaken Your Speculator Mind” that I wrote many years ago.

Now, no guarantee is implied here. And I apologize ahead of time if I am wrong and jumping the gun, so to speak. But when the charts give me that feeling that I’ve been here before, I have to at the very least pay attention.

Frankly, I do not care if you believe me or not. I’m merely sharing my own fears out loud here. Yes, it’s an ego risk for sure, but fear can be a healthy thing. It’s what saved my portfolio just before the tech wreck of the late ‘90s and the almost total destruction from the economic fall of 2008; and both times I was ahead of schedule in my fears.

I am probably wrong anyway, at least this month; but no matter how much I try to convince myself that staying long in this market is the right thing, those chart patterns and the length by which they stay overbought tugs at my heart so as not to trust it.

Now, there are many strategies for one to deal with market fears. Getting out totally is one of them, but not the only one. Fact is, there are put options which can act as an insurance policy against a serious downdraft. And if this is merely a pause in a bull swing, then call options are cheap enough to go long without taking on all the risk; as the risk is predefined by the options.

Why do I think a fast correction is a strong possibility? Gut instinct based on past market situations. And past option expirations provide a track record.

Truth is, I think and always have thought more like a trader than a long term investor. I decried the buy & hold theory many years ago, and stated so in my books and articles. I may have a long outlook from time to time just like everyone else, but I feel strongly this so-called next bull run will not happen overnight; and the short term is the only thing that I do know I have a strong chance at predicting.

So, I do not doubt Mr. Birinyi at all; he may indeed be right about the longer term. However, this is March; and it has options expiration on March 16th, the third Friday of the month.

Furthermore, there are far more than just stock options expiring this month. Included in this quarterly event are expirations stock futures, bond futures, index futures, etc. That’s a lot of expirations the market crowd has to yet deal with; and I do not trust the emotions of their decision process. I just accept the fact that it often gets ugly before it gets pretty.

Think for a moment about all those decision by big traders and hedge funds. In other words, whenever those put options get placed or an index or a stock gets put, someone has to decide what to do with it; whether to buy, sell or hold. And sometimes those folks prefer dumping their positions before the option expiration date; and sometimes, just after.

Now the question is, can the market handle the option expiration volatility this month without imploding at least to some degree? I think not. It didn’t implode last month, and that makes this month an even better target, because February was a non-quarterly expiration month; and that makes March a more likely candidate for some action.