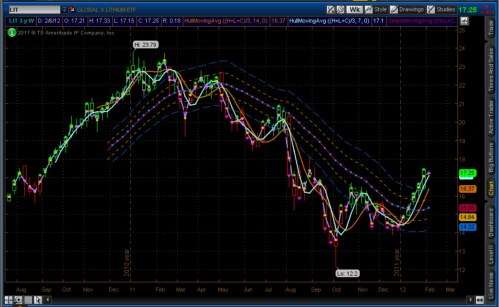 If the recent article at Motley Fool is accurate, then look for lithium prices to rise; but you don’t have take their word for it. Simply look at the trend of the exchange traded fund for lithium stocks, which show the train has already left the station.
Advertisement

One look at the weekly chart of Global X Lithium ETF (NYSE: LIT), which fell 39% in from its 52-week high in 2011, and the price dynamics clearly show the trend bias has shifted from bearish to bullish with a bump in price by 24% from the mid-December low. Also look at that price breakout past the 20-period moving average channel.

Good news for speculators and traders, but not so great for automotive companies which are now highly dependent on a new limited-supply commodity called lithium. With its shift from mobile devices to electric cars, lithium now plays an increasingly important role in the global economy; and America is not in control of the supply as it is with natural gas.

In 2011, fears of a global economic slowdown weighed heavily on the industry, which curtailed prices. That has now changed, especially now that more EVs are coming on-line like the Chevy Volt, Nissan Leaf and even the Prius Plug-in. According to Fool.com, analysts expect lithium prices to jump 20%. Is that from today’s price or the price of late December?

For the record, higher demand often means rising prices for commodities, and lithium has a supply problem in that America is not exactly bloated with the metal. In fact, zinc would be a much better choice from a safety as well as a supply standpoint. Nevertheless, china’s recent limit on rare earth material exports creates an potential opportunity for investors in the companies that produce lithium, but will squeeze margins on EV products which are already being squeezed from development costs..

Also for the record, Sociedad Quimica y Minera (NYSE: SQM) is the world's largest lithium producer, with huge reserves in Chile. Just guess who has been eyeing their supplies? You guessed it, China, where a major development is going on to develop a major battery manufacturing industry along with their auto industry, thanks to companies like General Motors and othe rforeign entities.

On the application side, battery-makers Exide and A123 have in the meantime had their stocks lose a lot of ground in 2011. Then again, the high prices of Evs have not helped the sales volume. Regardless, higher lithium prices will hurt these the battery-makers, because there is an economic limit on how much these higher prices can be passed on to their buyers like General Motors, Ford, Toyota, Nissan and others. Of course, the public is at the end of that pass line.

And no matter how safe the government and GM may state that these cars are safe, and they are, simple fact is, lithium is still more risky than zinc, which is why lithium has to be handled in the ion form.

So, what is raising lithium prices? Think China; think use in greater volumes, which at this point are miniscule by comparison to what would be needed to displace all the gasoline vehicles.

Two technologies would put a limit on lithium, though. The first is a zinc-air battery; the second is the advancement of the IC engine using the split-cycle configuration.

In the meantime, is lithium going up in price in 2012? You betcha! Besides, the chart says it already has. Question is, how much this time?