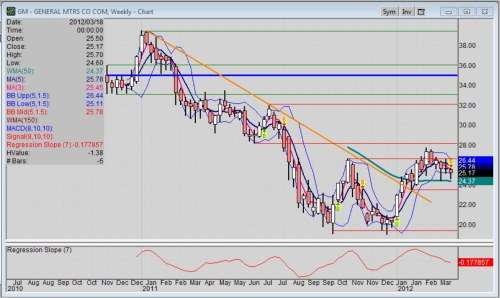 Insider Monkey, a unique financial equity website, introduced its daily Billionaire Hedge Fund Index some time back to exploit transactions of insiders. You may be surprised to find General Motors Company (NYSE: GM) stock made number 17 out of the top 30 billionaire-owned stocks listed.
Advertisement

Now, one might think that Toyota Motors (ADR: TM) and Ford Motor Company (NYSE: F) would make the Billionaire Hedge Fund Index before General Motors (NYSE: GM). That is not the case, though. So, while it’s important to understand why, it is also important to accept the fact that being on this list is significant for GM stockholders and potential stockholders.

The website even went one step further. It created a Billionaire Hedge Fund Index to track the top 30 holdings of these 39 billionaire fund managers.

Now, it’s a well known fact that insiders profit from their transactions. For example, more than 59,000 different insiders made public filings with the SEC in 2009, and that was not a great year. The year before that, more than 65,000 did.

The website owners openly admit that blindly imitating all of these insiders won’t yield much. However, monkeying only the top insiders, the ones who have the best track record, is a different story. Since the end of 2011, the SPY has made 12.3%. The Billionaire Hedge Fund Index cranked out 16.7%; that’s a significant increase by over 30%.!

For the record, Insider Monkey uses a hybrid evaluation system that exploits insider transactions and other market anomalies to reduce the number of insiders who are worthy enough to, as the site says, monkey. Insider Monkey also provides high quality evidence based articles to inform individual investors about the intricacies of investing.

GM, on the other hand may be mid-positioned on the list of 30 stocks at position 17, but the number of its followers is 9, while the rest of the pack drops only to 8. For a point of reference, 9 billionaires also own GLD, the ETF tracker for gold.

Regardless, the fact GM is on this list at all says something that billionaires expect good return on their investment, which is obviously not a day trade, but a long-term investment.

Now, I am a short-term trader more often. However, anytime I find a good fundamental story for holding longer term, then I must pay attention.

Of course, the weekly chart of GM stock doesn’t seem too impressive. Since its IPO in November, 2010, the stock made its highest high of 39.48 within a couple of months. Since that time, though, GM stock tanked to a low of 19.00 and 19.05 for a double bottom. The stock closed last past Friday at 25.17.

Point is, the stock is far below its IPO price of 33 and its opening day price of 35. So, question is, what do these billionaires know that the charts have yet to reveal? And if they are already long the stock, then who is going to come in to buy and propel the stock higher? Will they buy more? Or are they counting on starting a rally, then selling their stock to the us, the public, as we jump on the train?

This is an interesting scenario indeed. And I for one will be watching the price action of GM stock very closely.

Toyota's First EV Will Have a Name of BZ: Toyota BZ
First Videos From Inside The Boring Company's Las Vegas Loop
END_OF_DOCUMENT_TOKEN_TO_BE_REPLACED