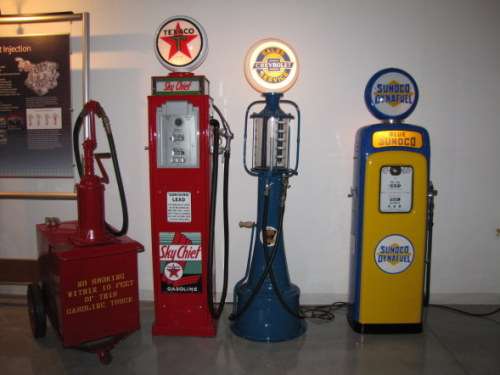 If you are in any way affiliated or simply want to know more about the North American hydrogen and fuel cell market, the Fuel Cell and Hydrogen Energy Conference & Expo is considered a "must do" event! It is touted as the place where partnerships are formed, deals are made, and new hydrogen technologies are introduced. This year’s event returns to Washington, D.C. and runs February 13 - 16.
Advertisement

The picture taken at the GM Heritage Center in Sterling Heights, Michigan, shows the original types of gasoline distribution equipment. Point is, we’ve been groomed to expect our transport fuels in a similar fashion; and we don’t want to be inconvenienced waiting to recharge on a long trip. Hydrogen distribution would make that a reality and in similar fashion.

That is why over 100 exhibitors will benefit from this expo. It is the most fertile environment for hydrogen technology development and commercialization. According to the website, www.fuelcellandhydrogenenergy.org , more than 1,500 key players in industry, government, the media, and communities from more than 20 nations are expected to participate.

Daimler, GM and Toyota are rated Platinum Sponsors, whereas The Lind Group and Honda are rated Gold. However, that is not all. It is expected that attendees will have the opportunity to listen to 150 speakers and will have direct access to over 40 conference sessions.

You do realize that hydrogen is where we are going; that is, eventually. Natural gas is cheap right now and may overtake gasoline for large trucks in the meantime; and if T. Boone Pickins has his way. Furthermore, we already have battery powered vehicles defining the official electrification of the automobile. Before you know it, we will indeed transition away from fossil fuels toward clean energy; and hydrogen will be a master key in that equation.

Last night I watched Dennis Miller on an HBO special joke that we will probably eliminate oil from our energy use when we run out of it. That thinking is not that far flung, as ICE (internal combustion engines) are getting more and more efficient. We’re actually trying real hard not to run out of petrol. The Chevy Cruze Eco, for example, gets 42 m.p.g. highway; and the future mandates may expect a lot more, like 62 m.p.g by 2020. With new split-cycle engine technologies like the Scuderi ( Read - Scuderi to Return to 2011 SAE World Congress ) and the opposed design of the Tour Engine, we may get there.

Nevertheless, gasoline will eventually fade, as did kerosene in its heyday. Albeit, natural gas is strong contender, hydrogen is cleaner, and its by-product is water. That means hydrogen may be the best candidate for replacing gasoline.

When you think it over, hydrogen can be burned in an ICE or processed in a fuel cell electric vehicle; and that solves the range anxiety issue. So, keeping pace with the progression of this commodity and the associated technology is crucial for anyone who still thinks that personal transportation is a need. In fact, in global terms, it’s just expanding.