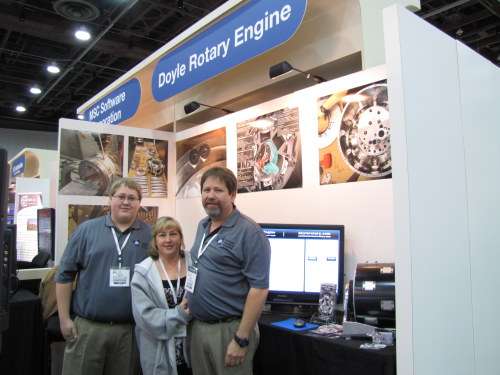 There are now more variations to the split cycle engine development than ever; and the latest is the rotary design of Lonny Doyle.
Advertisement

I almost passed up the Doyle Rotary Engine at SAE World Congress 2012. Fact is, I had just finished speaking with Pinnacle Engine and was heading fast toward the FEV display. Then I looked to my right, paused, then went on. After the FEV visit, I was simply drawn back to the Doyle display.

When I looked again, I noticed, much to my surprise, that the Doyle Rotary Engine is also based on splitting the cycle. For sure, that makes it different than Scuderi Engine and Tour Engine. Recall the Scuderi holds the traditional single crankshaft design; Tour engine has an opposed piston arrangement with a single head and dual crankshafts. So it seems Lonny Doyle has introduced us to another variation of the split cycle.

For those who are new to the term, split-cycle, though, be apprised that is a modified version of the Otto Cycle or 4-cycle engine; intake, compression, power and exhaust. In the case of split cycle, the cold elements, intake-compression have dedicated pistons. Likewise, the hotter power and exhaust elements of the cycle have their own dedicated pistons. Result is an increase in efficiency greater than what we have on the road now even with all the latest downsizing, turbos, direct injection and variable cam and valve timing.

One area shared by most split-cycle engine developers is this: The engines fire AFTER top dead center. So, it is the one correction of the conventional engine that bears repeating. The traditional Otto Cycle engine must fire before top dead center, which makes the engine essentially work against itself for a short duration and increases combustion temperatures dramatically.

Moreover, the Doyle Rotary, like Scuderi and Tour, completes the four strokes in one revolution of the engine, whereas the traditional engines require two. That’s another benefit of splitting the cycle. Nonetheless, unique to the Doyle design is thus the rotary configuration as a split cycle. So, as you can surmise, the message here is that the split cycle avails many arrangements and now appears unlimited.

According to Lonny Doyle, whom I met for the first time at SAE, the first prototype first fired in 2010. Success was short lived, though, due to seals gaulding against the aluminum. The next prototype solved the issue by remanufacturing the parts so the seals would glide across the seal surfaces that were plated and hardened to the same specifications that Mazda used.

I admit, this rotary arrangement takes a bit of getting used to. For example, the crankshaft is stationary. This makes many wonder how the torque is being created. Also, some want to point back to the early failures of the Wankel. However, Doyle points them back toward a Wikipedia note that says, "In 2010 Audi revealed that in their electric car... they would have a small 250 cc﻿ Wankel engine. FEV Inc. revealed that, in their electric version of the Fiat 500, a Wankel engine would be used."

OK, now it’s time for a couple of videos to show the process even better.

So, the questions most often asked of any split cycle: Is this Doyle Rotary engine another potential candidate for a generator motor? Or is it a primary engine candidate? Regardless of the engine style, it seems to me a generator engine may be the first introduction of any split cycle into high volume vehicles; albeit, these electric/hybrids are still far from high volume at this point in time.

Another unique feature to the Doyle Rotary, though, is that, unlike Scuderi and Tour’s split cycle, the ignition of the fuel takes place in a centralized chamber. There is a logical reason for this, at least the way Doyle explains it. He believes, rather knows, that it takes time for fuel to burn completely. This central ignition area allows for that time to be put to good use, completely burning the fuel as well as expanding the gasses efficiently. As pressure expands the gasses move into the power cylinder, thus completing their work for a more complete burn cycle.

Perhaps we can argue over one configuration over another, but rest assured, Lonny Doyle is surely a unique individual. His entire family is involved; and I mean directly. Instead of just vying for more and more patents, though, so as to become an intellectual property entity, Doyle brings a sense of Henry Ford and Rudolf Diesel’s hands-on development to the development of the split cycle engine. If anyone can build a prototype engine and put it into a vehicle, I believe Doyle is likely that man.

I also agree with Doyle on this key point noted on his website, Doylerotary.com: “Instead of continuing to make small gains by patching the old design, it is time to change the conventional engine at its core.”

Doyle knows that quest is far from done; and so does Scuderi and Tour. Doyle’s own expense at the SAE, though, shows a personal as well as family commitment and business model not often seen in this high-tech, money-tight world. And regardless of how you view rotary engines, Doyle’s contribution to the split-cycle development is to be commended.

Brian wrote on May 1, 2012 - 9:58am Permalink
GO LONNY!
Trevor Roberts wrote on June 22, 2012 - 11:24am Permalink
Ingenious concept and offers the potential of a very balanced engine, but would it be responsive due to the rotating mass? The total weight of the rotating components of this design would appear to be less than that of a conventional engine, but the inertia of the total rotating mass of this design could/would be greater than a conventional engine. The conventional engine is easy to couple to a drive system and the conventional cylinder block offers a high degree of containment of the rotating components. How do you propose to couple this design to a typical vehicle drive train and offer containment of the rotating mass in the event of a catastrophic failure of the fixed shaft?
Robert Weekley wrote on June 24, 2012 - 1:26pm Permalink
Great Idea! ~ 25% of the mass of a conventional Engine, and 25% Less Spinning Mass sounds great! Is there a Running Example on a Test Bench yet? I have seen running examples of aviation 'New' Engines for years at EAA air Venture Oshkosh, and it take quite some time for some of these things to get delivered, but it depends on the level of simplicity, cost to build, urgent need by a target market for uptake, and so on. Still - from first looks - this sounds very promising, and even can be build in a Hybrid integration style - like the Pancake motor of the Honda IMA system! (That could take car of any throttle response questions, too!) Personally - I see this as a tool for a major improvement for Series Hybrid Vehicles like the Via Motors VTrux product! Weight Reduction, Smoothness, build Simplicity! Great!
Emilio wrote on February 20, 2015 - 3:17pm Permalink
Great engine for use in experimental aircraft if it can develop 120 hp at a 100 lb weight. What would be the price? Will look for your reply. Thank you. Emilio