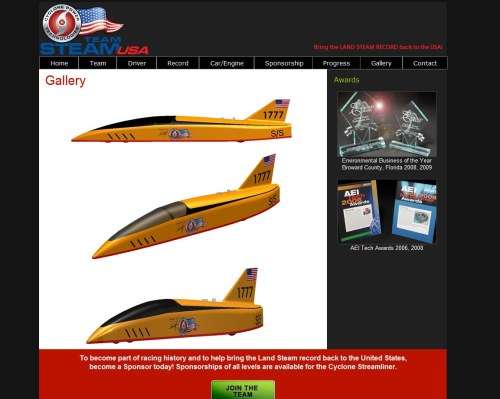 Cyclone believes that this alliance will help expedite vehicle construction and greatly enhance the Company's chances to claim the title of world's fastest steam car. The vehicle will be powered by an advanced Cyclone Engine which, unlike all previous steam record attempts, can one day be placed in modern clean-emission, all-fuel production cars and trucks.

According to the news release, the Poteet & Main Speed Demon has already achieved speeds at Bonneville in excess of 462 mph using a twin-turbo, V8 engine. Due in part to its in-line front wheels, the streamliner boasts a remarkably advanced aerodynamic design which greatly reduces wind drag.

With the Cyclone Engine as its power plant, Team Steam USA believes it can readily exceed the current international FIA speed record of 148 mph for steam powered vehicles set by the British in 2009, possibly approaching speeds of 200 mph.

For the record, the Cyclone team has already been invited by NASA to run its vehicle at the Kennedy Space Center, only miles from where the original steam record was set in 1906, prior to heading to Bonneville.

Nelson Hoyos, Director of Development of Cyclone's Team Steam USA commented: "George and Ron have demonstrated great success in both racing and business throughout their extensive careers. We're very excited to add their designs, experience and expertise to this important project to beat the current US and international steam records. Having set an aggressive schedule to get our streamliner on the track by this summer, we are confident in our combined abilities and believe that George and Ron will be able to contribute meaningfully to help us meet our goal."

Ron Main added: "I'm very proud to be part of this concerted effort on behalf of Cyclone's Team Steam USA. Like Nelson and his team, we understand the great environmental and economic importance of demonstrating the performance and capabilities of the Cyclone Engine, and I look forward to helping them showcase what this ground breaking engine can do. We are here to help in any way we can."

Harry Schoell, Cyclone's Chairman and CEO, also commented: "We thank George and Ron for their strong support of this project, which will be of great value to our overall engine technology development efforts. We have worked hard to compile a strong team of engineers, technicians and racing experts, and are confident in our ability to validate the power and environmental attributes of our Cyclone Engine through this highly visible land speed record effort."

This is not this writer’s first report on cyclone or the LSR project. Frankly, I was very disappointed that the event did not take place last year at Bonneville as had been earlier planned. However, the team now seems to have new life and is taking place as a true team effort to make the run a success,

For the record, Cyclone Power Technologies is the developer of the award-winning Cyclone Engine - an all-fuel, clean-tech engine with the power and versatility to run everything from waste energy electric generators and solar thermal systems to cars, trucks and locomotives. Invented by company founder and CEO Harry Schoell, the patented Cyclone Engine is an eco-friendly external combustion engine, it is ingeniously designed to achieve high thermal efficiencies through a compact heat-regenerative process, and to run on virtually any fuel -- including bio-diesels, syngas or solar -- while minimizing the release of greenhouse gases and irritating pollutants into the air.

For more about Cyclone's Team Steam USA, and to support this history-making project, visit: www.teamsteamusa.com.