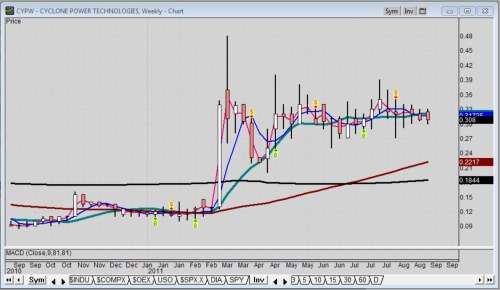 This is significant for stock investors. Cyclone Power Technologies (Pink Sheets: CYPW), developer of the all-fuel, clean-tech Cyclone Engine, announced today that it is now a fully-reporting company with the Securities and Exchange Commission.
Advertisement

The Cyclone Power Technologies (Pink Sheets: CYPW) will begin filing current reports and other disclosure materials as required under the Securities and Exchange Act of 1934, effective as of this month.

"We are keeping our commitment to our shareholders that we would become an SEC reporting company and move our common stock to a higher exchange," stated Christopher Nelson, Cyclone's President. "This is a major step forward in our corporate development. Our hope is that with greater transparency, we can continue building shareholder and customer confidence, and attracting new investors and partners to our company."

The current Form 10 filing, under Rule 12g of the Securities Act of 1933, must still be cleared through SEC comments before the Company can up-list its common shares, which is anticipated occurring in the fourth quarter.

As you see by the price on the weekly chart, CYPW is still classified as a penny stock. And for the sake of full disclosure, I own some shares in my retirement account as part of my growth portfolio.

The fact Cyclone Power is making this step at all shows self confidence provides all holders and future holders of the stock comfort in its attempt to be honest. It makes the company more open to public accountability.

At the present price, you either own it or you don't. You either believe in the company's potential with its technology or you don't. I, for one, believe in it and have placed my money where my keyboard is, becuase of its ability to use waste fuel, plus it can be used for generators.

Cyclone Power Technologies is the developer of the award-winning Cyclone Engine - an all-fuel, clean-tech engine with the power and versatility to run everything from waste energy electric generators and solar thermal systems to cars, trucks and locomotives.

Invented by company founder and CEO, Harry Schoell, the patented Cyclone Engine is an eco-friendly external-combustion engine, ingeniously designed to achieve high thermal efficiencies through a compact heat-regenerative process, and to run on virtually any fuel - including bio-diesels, syngas or solar - while emitting fewer greenhouse gases and irritating pollutants into the air.

In addition, we reported here at Torque News about a visit by Congressman, Allen West, to Cyclone Power as part of normal operations by congress to explore cost-saving military engine opportunities. The goal was to demonstrate the Cyclone Power engines' eco-friendly, multi-fuel technologies, and discussed the viable cost saving opportunities they present for both military as well as civilian power requirements.