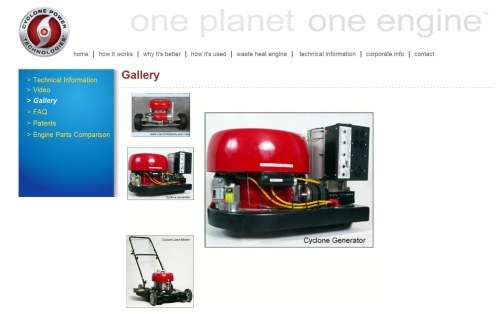 Cyclone Power Technologies (OTCQB: CYPW), developer of the all-fuel, clean-tech Cyclone Engine, announced that its licensee in China, Great Wall Alternative Power Systems Ltd., has completed the build of the first prototype engines under its License Agreement, and has begun in-house testing of these units.
Advertisement

Cyclone Power Technologies (OTCQB: CYPW) is the developer of the award-winning Cyclone Engine - an all-fuel, clean-tech engine with the power and versatility to run everything from waste energy electric generators and solar thermal systems to cars, trucks and locomotives.

According to the news release, the engines built by Great Wall are based on Cyclone's WHE-25 design and are meant for use with biomass-to-power generator systems. Applications will include distributed combined heat and power (CHP) systems, and power sources for bio-char producing environmental remediation equipment. Initial compressed air testing of Great Wall's engines has been successful, and steam testing will commence shortly. These units will ultimately be manufactured and sold only in China.

Great Wall's Managing Director Robert Devine, commented: "We see a multi-billion dollar market for distributed power in China's rural areas. With the Cyclone Engine, we can deliver viable, low cost biomass-based power solutions integrated with a bio-char process that can help remediate water and soil pollution. Operating within China can sometimes be challenging, and that has admittedly pushed back our production schedule. We are pleased to be back on track and fully committed to seeing this project through to completion."

Cyclone's President, Christopher Nelson, also commented: "We are glad to see real progress with our partners in China in getting these engines closer to market and look forward to their next phases of development. China presents a major market opportunity for our multi-fuel capable, eco-friendly engine technology, and we are excited to be capitalizing on it."

It is surprising to many that the steam engine is still alive. Actually, it never died. What do you think runs those turbines at nuclear and coal power plants? Yes, it is steam.

This design is a closed loop system that definitely has merit for power generation. This writer, though, sees an equal future for use in transportation, because the engine burns fuel thoroughly, thus reducing pollution to a giant degree. It even burns bio-mass.

As a very small investor, I view this stock as having great potential. Between power generation and transportation, the future to me looks strong; and where one arena might fail, the other will surely do well. The company also seems to be doing things right with advances on the business end. This Chinese license is a case in point.

For the record, the patented Cyclone Engine was invented by company founder and CEO Harry Schoell. The engine is an eco-friendly external combustion engine, ingeniously designed to achieve high thermal efficiencies through a compact heat-regenerative process, and to run on virtually any fuel - including bio-diesels, syngas or solar - while emitting fewer greenhouse gases and irritating pollutants into the air.

The Cyclone Engine was recognized by Popular Science Magazine as the Invention of the Year for 2008, and was presented with the Society of Automotive Engineers' AEI Tech Award in 2006 and 2008. Additionally, Cyclone was named Environmental Business of the Year by the Broward County Environmental Protection Department.

Toyota's First EV Will Have a Name of BZ: Toyota BZ
First Videos From Inside The Boring Company's Las Vegas Loop
END_OF_DOCUMENT_TOKEN_TO_BE_REPLACED