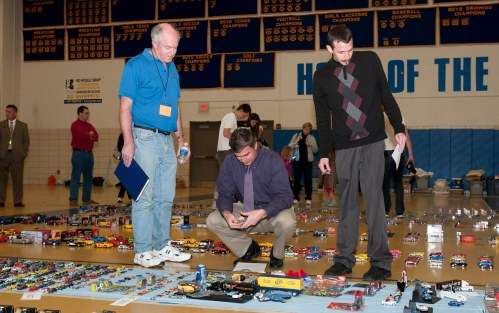 Think 40 years of collecting items like Corvette miniature cars and you get a showcase of more than 2,000 items. Is it enough for the Guinness World Record? Charlie Mallon is hoping it is.
Advertisement

Having helped run two estate sales in the last year, I dare say that I am fully aware of collectibles and just plain stuff that gets collected over time. So, when this news release by Chevy showed a guy with over 2,000 unique Chevy items, I just had to cover it.

To set the occasion, Mallon laid out 2,181 different Chevrolet items last Wednesday night at the Downingtown West High School in an attempt at what would be a newly created Guinness World Records category for “Largest Collection of Chevrolet Memorabilia.” Most of Mallon’s collection centers on the Chevrolet Corvette, a car he’s admired since he was a child.

In addition to the thousands of miniature Corvette cars that he put on display at the local high school gymnasium, Mallon also owns a 2005 Corvette coupe and previously owned a 1965 Corvette Coupe. “Corvettes have always turned my head,” Mallon said.

He decided to go for a Guinness World Records title after realizing just how many items he had collected over the years. Whenever he went on a vacation or business trip, he would always make time to find another piece of Chevrolet memorabilia.

In order to qualify for a record, Mallon had several witnesses, including a certified public accountant, verify the number of items in his collection and will submit a formal application to the Guinness World Records organization for review.

He wanted to set a world record partly out of curiosity about whether he did have the largest collection and partly to “validate my insanity to my wife,” he said. He might not know for weeks whether he has the record, and he admits someone else could try to break it. Either way, he wanted to make an attempt at setting the first Guinness World Records title in this category.

“I guess it’s just a personal challenge,” Mallon said. “It always blows people away when they walk into my basement and see all the items. I’ve been collecting so long that I wondered if I had the most.”