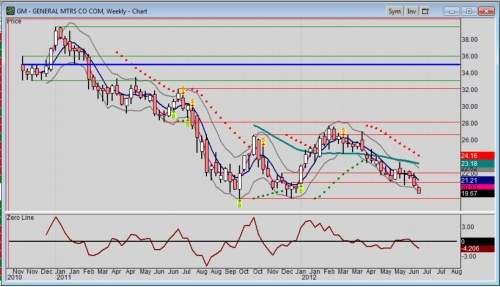 The price dynamics of the weekly chart of General Motors Company (NYSE: GM) stock do not lie regarding the recent trend bias. Question is: Will the lows hold?
Advertisement

Back in May, I noted in the article, Price dynamics show GM stock turning more bearish. Well, that now seems to be an accurate forecast, as General Motors Company (NYSE: GM) stock is once again testing the mettle of its owners as it heads toward testing its all-time low since its IPO.

Looking at the weekly chart, especially note the lows of October and December of 2011. At 19.05 and 19.00 respectively, this clearly defines a double bottom. Question now is, will GM stock produce a triple bottom? Furthermore, will that bottom hold or fail?

For those who thought the announcement that a buyout of many salaried retirees would make a difference, that is either wrong or the reaction is delayed. For sure, GM will pay a price as many retirees have vowed never to buy another GM product; the direct result for the company’s lack of loyalty. Read: GM may suffer future sales backlash from thousands of retirees

My own proprietary buy-sell indicator, though, clearly shown by the B and S designations, tells us the technical signals are accurate. Note how the trend bias since February has been bearish; and rightly so.

Also notice how the trend of the bars is heading toward those lows set in late 2011. Again, will they hold? Or will they give way to a new low? Furthermore, how low might GM stock go if they are passed? As Yoda the master Jedi might say, "Hmmm, difficult to tell. The dark side is clouding our vision."

Right now, the only way to play this dark side to the downside is with put options. However, if you own stock and are in that holding pattern, at least consider put options as a hedge. It’s your call as always.

Truth is, if I was looking for a bottom here to buy, I would have a hard time doing it. Reason is, there is no price history below these 2011 lows, except the pre-IPO prices of old GM. So, in that sense, your guess is as good as mine.

Of course, you could look at the fundamentals, the earnings, the sales projections, etc. However, price dynamics and technical analysis have shown time and time again to be far more trustworthy; at least in my experience for establishing trend bias, support and resistance levels. And right now, both are pointing down.

Perhaps if the general market would perk up, then GM stock might rise also. And I guess that’s the only real key we have. Watch the general market, because GM and its management decisions do not seem to be impressing anyone, especially the stock market.