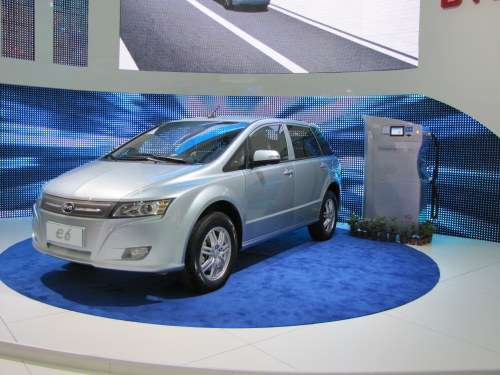 The Buffet factor says BYD and Chinese autos will compete

It happened so quietly. Realizing that the auto industry was on the cusp of a global bull market, Warren Buffet and Berkshire Hathaway made a large investment, but not in Detroit's well known automakers. No, Buffet chose to invest in one of China's growing automakers, BYD, because that’s where he expected his investment to profit most.
Advertisement

In the exhibit hall in Omaha, as usual all of the Berkshire companies displayed their wares. Among them was the GEICO gecko, Fruit of the Loom and others. One of them, though, was a BYD vehicle, complete with leather interior. Of course, BYD represents bare bones cars and competes on price, as cheap labor make it favorable. Cheap Yuan rate helps.

Now fast forward to the 2010 NAIAS in Detroit. There was BYD again, but this time as part of Electric Avenue display, complete with a charging station. That was key from a technology aspect, but more so for an investor like Buffet. Competitive electric cars are here in America.

Despite the car’s rather frail look, though, compared to Toyota, Honda, GM and Ford, the investment by Buffet still proves a point. There’s a new young gunslinger in town.

Fact is, it’s happened before. Volkswagen was once viewed as that tiny German car that American’s wondered would ever compete; but it did until costs forced it out of the country. Now it’s back, but this time it has fresh competition.

Any designer in the auto industry knows the reality. It took Japan over twenty years to build quality cars. It took Korea less than half that time. It will take China less than five, and India is next.

Look at the technology, styling and quality gains from the Koreans. At first their cars looked cheap and tinny. Now they look modern and just smell quality with tight fits and finishes that strike fear even at Toyota.

So will the Chinese cars like BYD make it here in America? It’s just a matter of time, but that time has been shortened with foreign investment. After all, even GM has trained them up in the way that they should go.

LG's New EV Battery Plant Is a Welcome News for Tesla
Tesla Giga Berlin's New Hurdle: It's Not Only the Gov't, but Now Tesla Itself
END_OF_DOCUMENT_TOKEN_TO_BE_REPLACED