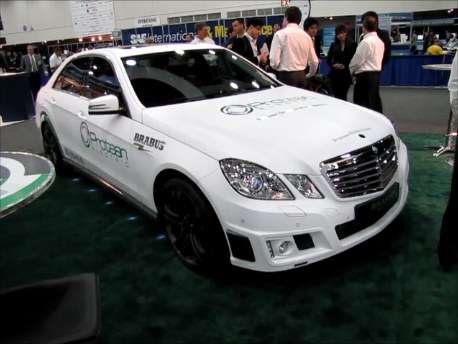 While the event marked the BRABUS Hybrid's premier North American appearance, fact is, Protean is no newcomer to SAE World Congress. This reporter has covered this in-wheel motor technology on many occasions. This time, though, the appearance is not a truck but a passenger vehicle.

Another fact is, BRABUS is a highly acclaimed independent automobile tuner; and the company chose Protean's electric in-wheel motors to power its "Technology Project Hybrid" based on the Mercedes-Benz E-Class. The BRABUS Hybrid vehicle is equipped with two Protean Drive (tm) wheel motors, which power the rear wheels, along with the vehicle's clean diesel engine.

Furthermore, BRABUS is known throughout the automotive sector for its discerning use of the finest technology to perfect the performance of its exclusive vehicles. The BRABUS Hybrid and Protean Drive(tm) offer elite automotive customers a practical, environmentally respectful solution without sacrificing performance and power.

"We're pleased to work with BRABUS to demonstrate what Protean's in-wheel electric drive can deliver to the world," Protean CEO Bob Purcell said. "Our in-wheel motors not only provide significant performance improvement, but do so in a very responsible way."

For the record, Protean is funded by Oak Investment Partners, a multistage venture capital firm and a lead investor in the next generation of enduring growth companies. This supports an important point that venture capital is making great strides in green, more efficient transportation. Aside from electrification and hybrids, some of this is making its way, mostly from private investors into the hands of engine developers.

Tsingshan's Threat to Tesla: EV Maker Is In Battery Crosshairs
Tesla-Funded Research Reveals One of The Biggest Mysteries of EV Battery
END_OF_DOCUMENT_TOKEN_TO_BE_REPLACED