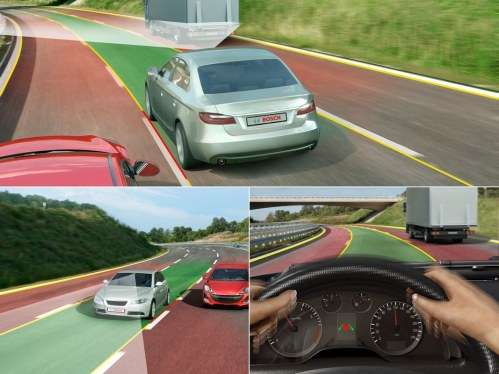 Estimates show that nearly 90 percent of all crashes are caused by driver error, making advanced safety systems an important focus for automakers and governing agencies. Bosch offers a plethora of active and passive safety technologies, including driver-assistance functions that can help reduce the number of accidents and save lives.
Advertisement

Bosch, on the other hand, thinks it has a solution by approaching the problem in three areas:

1. Driver assistance systems: Use the information from surrounding sensors to enable safe and comfortable driving

Which is best? Actually that’s the wrong question, because each has its unique part to play. And the release from Bosch indicates that it is more than ready to offer OEMs reliable systems.

“At Bosch, we are focused on developing systems that bring the world closer to accident-free driving,” said Scott Winchip, regional president, Chassis Systems Control North America, Robert Bosch LLC. “Safety technologies, such as predictive emergency braking systems and anti-lock brake systems for motorcycles, can help reduce the number of injuries and fatalities caused by traffic accidents, as well as the associated costs.”

Predictive Emergency Braking System (PEBS) – Bosch’s PEBS is based on the networking of a radar sensor with Electronic Stability Control (ESC) in three stages. It can assist in reducing rear-end crashes through its three-stage approach, thus offering drivers advanced warning for improved braking reaction time in critical situations, and assistance in avoiding crashes or reducing the risk of injury in crashes that are unavoidable

Stage 1: Predictive Collision Warning (PCW) identifies the risk of a collision and prepares the brake system to ensure the driver has access to full braking power. This preparation is followed by an audible and/or visual signal and an optional haptic alert (i.e., brake pulse), which signals the driver to react by braking or taking evasive action to avoid a rear-end collision. The timing of the warning is calculated using a radar sensor that continuously evaluates the distance and speed to the preceding vehicle.

Stage 2: Emergency Braking Assist (EBA) extends the warning by providing intelligent braking support. The system’s radar sensor continues to evaluate the distance and time to collision to the preceding vehicle and calculates the additional brake pressure required to avoid the collision. If the driver brakes after the collision warning, but fails to apply sufficient brake force, EBA automatically increases the brake pressure.

Adaptive Cruise Control (ACC) reduces driver stress by automatically controlling the vehicle’s speed and maintaining a predefined minimum distance to the preceding vehicle using a radar sensor. Standard ACC can be activated from speeds of around 20 mph and up and supports the driver primarily on the freeways and long hauls. ACC Stop and Go controls the speed and distance to the preceding vehicle down to vehicle standstill, supporting the driver in heavy traffic situations

Mid-Range Radar Sensor (MRR) – The new Bosch MRR sensor supports functions such as ACC and PEBS. Working the same way as the existing long-range radar sensor (LRR3) in the 77 GHz frequency band, it records the distance and position of obstacles with precision and at far less cost. This sensor also can be used in the rear of the vehicle to support functions such as blind spot detection, cross traffic alert and lane change assist.

Lane Departure Warning (LDW) – Bosch’s LDW uses a video camera to detect lane markings ahead of the vehicle and monitor the vehicle's position in its lane. When the function detects that the vehicle is about to unintentionally leave the lane, it warns the driver through a visual, audible and/or haptic signal (i.e., steering wheel vibration). The function does not issue a warning when the driver activates the turn signal to change lanes intentionally.

Lane Keeping Support can actively help the driver remain in the marked lane by using a video camera to detect if the vehicle is getting too close to the side of the lane and then taking action to correct the vehicle’s position. When connected with electric power steering, the system will provide a gentle, but noticeable steering torque to prompt the driver to keep the vehicle in the lane. For vehicles without electric power steering, lane keeping support is achieved by applying braking torque to individual wheels. The driver remains responsible for control of the vehicle and can override the system at any time. When the driver activates the turn signal to intentionally change lanes, the function does not intervene.

Driver Drowsiness Detection identifies when a driver is at risk of falling asleep and sends a warning to remind the driver of the danger of driving while tired, thus assisting in averting a potential crash. The system operates by analyzing the driver’s steering behavior using data collected from a steering angle sensor or electric power steering system. It identifies “deadbands,” or phases where the driver does not steer for a brief period and then makes an abrupt steering correction. The system combines the frequency and strength of these reactions with other data, such as vehicle speed and time of day, to calculate a tiredness index. If this index exceeds a specific value, an audible, visual (i.e., flashing coffee cup) or other alert mechanism can warn the driver that they are tiring and at risk of falling asleep at the wheel

Motorcycle ABS includes speed sensors at both wheels that register the vehicle’s speed. If a wheel risks locking during braking, the ABS hydraulic unit controls the pressure applied by the driver and the wheel’s braking force and deceleration. This process preserves the rotation of the wheel and keeps the bike stable, even on varying surfaces, helping the rider achieve the shortest and safest stopping distance.

iBolt™ – Bosch’s weight-sensing iBolt™ provides safe deployment of vehicle airbags through the accurate and reliable classification of occupants, including an empty seat, one-year-old infant, three- and six-year old child, 5th percentile female and 50th percentile male. The system uses an electronic control unit coupled with two to four seat-securing bolts with integrated sensors that help determine the weight of the front-seat passenger. These sensors report the weight classification to the airbag control unit, which adjusts the force of deployment based on the occupant’s weight – with reduced intensity or turned off completely. Bosch’s system meets the Federal Motor Vehicle Safety Standard 208 (FMVSS 208) and supports 5 Star Rating for 2011 U.S. New Car Assessment Program (NCAP).

This is not the first time Bosch has reached out to show its capability. As a supplier, they do not garner as much attention as OEMs. Read: Bosch touts functional excellence at the Power of Innovation media event. I was invited last Fall to their engineering facilities in Michigan for a press function.

At the Power of Innovation media event, for example, Bosch, whose name is ubiquitous within the auto industry supplier base, showed the media its technical advancement that will help automakers in their quest to reach the latest proposed federal CAFE mandate of 54.5 MPG by 2025.

Toyota's First EV Will Have a Name of BZ: Toyota BZ
First Videos From Inside The Boring Company's Las Vegas Loop
END_OF_DOCUMENT_TOKEN_TO_BE_REPLACED