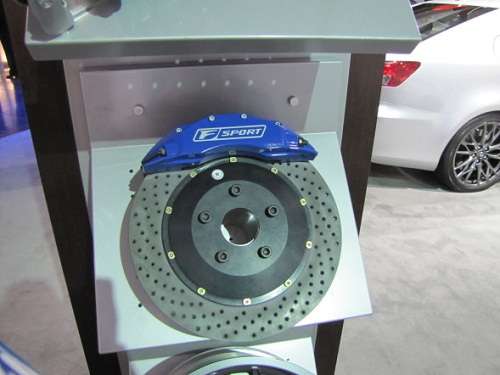 Another call for an FMVSS standard for aftermarket brake rotors

While an FMVSS standard for brake rotors would apply to all manufacturers, the target by Affinia Group seems to be toward the global aftermarket industry, which has had a tendency to migrate to the lowest-cost import product over safety and reliability. Question is: What's taking so long to decide an obvious safety issue?
Advertisement

It’s been five months and we have not heard a word from NHTSA or SAE on this safety issue. For the record, the news release by Affinia Group initiating the NHTSA request actually dates back to November, 2011.

At first glance, it’s hard not to agree with Affinia Group on their initial request to NHTSA, the National Highway Safety Administration. After all, it is doubtful the public is even aware that there may indeed be safety issues surrounding aftermarket parts; and brake rotors seem to be the logical choice to raise awareness.

Many might have missed, though, that the SAE was already involved. And since this reporter will be covering the SAE World Congress in Detroit later this month, be apprised that I will follow up further. I do know the new FMVSS standard could be based on the already-completed work of a subcommittee of the Society of Automotive Engineers (SAE); and Affinia looks wise to have used SAE for leverage. Please reference SAE Recommended Practice J2928.

Next obvious question is: Will this be the first step toward a more comprehensive measure to regulate the aftermarket industry with more Federal Motor Vehicle Safety Standard (FMVSS) edicts? In other words, start with the most obvious or worst safety case, brake rotors, then extend to other products in the future.

Surprising fact is, at present there is no such mandatory standard in existence in America for brakes; and brake rotors are indeed critical components of a vehicle’s primary safety feature, its brake system. Yes, I know; it’s scary.

According to Affinia’s old news release, the proposed rule would require rotors to be stamped with an identifying mark, including a “DOT” symbol representing the manufacturer’s certification that the part meets the new standard.

How is this any different than reading USDA when you buy food at the meat market? Truth is, it’s not; and would likely be welcomed by the public. I know I do.

A more interesting question is: Who is this Affinia Group? According to Wikipedia, the Affinia Group is a motor industry company that was formed in 2004 through the $1 billion acquisition of the Automotive Aftermarket Group from Dana Corporation by The Cypress Group. Other records show Affinia as literally an affiliate of the Cypress Group.

The company specializes in the design, manufacture and replacement of parts for and on and off-road vehicles; specifically filtration, braking and chassis components. The company is headquartered in Ann Arbor, Michigan with approximately eleven thousand employees in nineteen countries.

According to Affinia’s website, Affinia Group is intensely focused on service to the aftermarket, with 98 percent of all revenues originating from the design, manufacture and marketing of replacement parts and services. The company is highly diverse in terms of products, markets and geography, from passenger cars to 18-wheelers and from earth moving equipment to windmills; in other words, a great diversity of applications.

The privately held company has operations in North and South America, Europe, Asia and India.

Next question is: Why would they have an interest in a new FMVSS standard? I mean, that’s a big request. My take is that they want their suppliers, which are already around the world, to have a level playing field, because low-cost competitors from the likes of China, India and elsewhere may or may not have any regulating authority over them. So, the best policy is to make one at the end user country, namely the U.S.A.

Then I read the news release again for clues. It appears Affinia Group first discovered failed thin-walled rotors on the U.S. market as far back as 2008. [Correction 4-12-2012: Thin-walled rotors was a process which I thought Affinia had actually developed, but that assumption and reading was in error.] However, they did notice many of the rotors that were showing up on the market were increasingly subject to cracking and failure. Worse yet, these were imported products not made by Affinia. So, the company still had little choice but to take legal action to stop the importing of these products.

Bottom line is, a FMVSS standard for brake rotors is good for business and for Affinia Group, but mostly for the welfare and safety of auto owners who depend on them for the safety of their families. So, when will this standard become official?

Tsingshan's Threat to Tesla: EV Maker Is In Battery Crosshairs
Tesla-Funded Research Reveals One of The Biggest Mysteries of EV Battery
END_OF_DOCUMENT_TOKEN_TO_BE_REPLACED