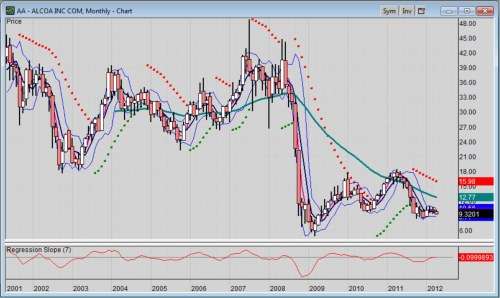 Alcoa Aluminum stock may be a long-term auto-related opportunity

As Alcoa (NYSE: AA) beat the first-quarter earnings estimates, some astute investors might reconsider whether this is the time to place the stock on an investment watch list, especially as the auto industry plans its next wave of future body structures.
Advertisement

Aluminum and light-weight automotive body structures surely go together, no less than light-weight bodies and lower MPG. So, it should be no surprise that the earnings of Alcoa (NYSE:AA) would bring the company into focus once again, especially with the advent of higher MPG requirements by 2016 and 2025.

All of us know that forcing people into smaller cars is not advancement. Even a Ford engineering manager at 2012 NAIAS had the sense to say there is a limit to downsizing engines as well as auto bodies. In fact, he noted the next wave of gains for automotive will have to come from lighter body structures.

Truth is, auto body structures are already becoming hybridized in their own rite, but have a long way to go. They are still made mostly of sheet steel stamped in complex forms, then welded together for that unibody construction. However, they are getting increasingly amounts of aluminum and magnesium pieces, too, especially for the unsprung portions like suspension parts.

With regard to Tesla and Mercedes SL, both have all-aluminum structures. They cost more money, but so do lithium-ion batteries. Furthermore, a lighter body structure would provide greater driving range even for full EVs.

Now, imagine an all-aluminum Chevy Cruze, for example, powered by a revised Ecotec engine with a split-cycle configuration or even a downsized engine with an electric supercharger, stop-start and maybe even an air-hybrid component. Then the gas mileage would be awesome compared to what we have now even in the city; and the overall cost wouldn’t be formidable for the masses as what we have for EVs.

Point is, any company that makes aluminum will be in the sweet spot, provided they can remain healthy during this latest downturn.

Thus far, it seems Alcoa may be getting into fighting shape. Sure, there are other aluminum competitors, but AA is an American company; and its position to provide the American auto industry with what it needs can literally position itself like the companies that sold picks and shovels to gold miners of old.

Aluminum vs. Steel vs. Carbon Fiber

One TN reader noted many months back that billet steel trades around $500/ton, while aluminum trades at $2,200/ton during a period of rock bottom aluminum prices. His implication seems clear: If you cut a thousand pounds off the weight of a car by going aluminum, the ton of aluminum you had would still add over a thousand dollars to every car.

While he agreed that lowering the weight of cars is definitely the future, there are lots of other ways of doing it. He felt the auto industry could very easily take a page out of Boeing book and investigate carbon composite body structures. Or a page from the SmartCar book and investigate high-strength steel reinforcements.

Fact is, the auto industry is already using those materials, just not extensively. Problem with carbon fiber is the cure time. Try doing that at the rate of 60 cars per hour. At least aluminum has the potential to have present welding technology, not to mention more use of extrusions which are far cheaper, thus eliminating many key stampings altogether. In high-stress areas, castings could be used, as witnessed on the Mercedes SL.

Looking at a monthly chart of AA, it is clear that aluminum and Alcoa have not faired well since 2008. And that should tell you something.

If the auto industry faired well before 2008, though, then crashed only to revive to its present position, perhaps aluminum use and production will likely follow that same pattern. It’s just shifted in its timing of recovery.

Granted, it is not my usual writ to recommend any stocks. I prefer to let the charts do the talking. However, I must admit this chart has yet to show a turnaround. Then again, today’s quarterly report may be the catalyst that might turn the trend; perhaps not all at once, but over the next year.

Personally, I will be watching the prices of the options as well as the stock dynamics for opportunities. For sure, the general market is swaying the entire market including the auto sector stocks, but that will not remain forever.