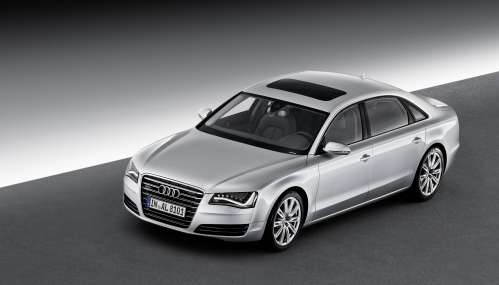 Running very strong as it enters the final month of the year, Audi of America will likely become the first major automobile brand to top it sales performance from before the big market crash of 2008. Audi is on track to finish 2010 with its highest U.S. sales in history. The luxury brand's gains in 2010 far outstrip the pace of recovery for the overall American car market.
Advertisement

After the close of November 2010, Audi of America felt so pleased with itself that the auto maker issued a second press release discussing its record-setting vehicle sales for the prior month and for the year so far. That might be a record for monthly press releases covering a prior-month's sales. Usually a company puts out just one.

Audi's first release, issued December 1, was a typical summation of the luxury label's sales levels for November 2010 – with the usual encomiums for the milestones reached that month. But apparently Audi felt those milestones were so praiseworthy that the company issued a second press release on December 3, to look more closely at its “sales momentum story,” as the document's title promised.

The company stressed that Audi of America currently is selling vehicles at a faster pace than it ever has before. That's a sizable achievement. The U.S. auto market is recovering in 2010 and will see more new-car purchases than it did in 2009. But total vehicle sales remain well below historic levels – apparently for everyone but Audi. If it beats its own annual sales record at the end of the year, the German luxury brand likely will be the first major auto label to regain the size and strength lost when the American car market shriveled in 2008.

In fact, Audi's new-found strength puts it in a better position than it enjoyed prior to the crash. That's because the brand, which is part of Volkswagen, is recovering faster than other car companies, therefore taking a larger slice of the pie.

By the numbers, Audi's November 2010 sales of 9,365 vehicles was a 37.5 percent gain from the same month in 2009. The American car industry at large saw sales grow only 17 percent that month, according to the Autodata service of industry consultants Motor Intelligence.

Audi's tally to date makes it all but certain the company will close 2010 as a record year. As the company put it in its first, December 1 press release, “the November results keep the German luxury automaker on track to set a vehicle sales record in the U.S. by year-end. The existing annual sales record for Audi in the U.S. is 93,506 vehicles sold in 2007.”

Two days later, in the December 3 release, Audi noted that its November performance gave it 9.5 percent of the American market for imported luxury cars. The only month in which Audi earned a greater share of that segment was April 2010, the company noted.

In another perspective, Audi remains a much smaller player in the overall American market. When you add together total U.S. sales, rather than just luxury import sales, Audi ends up with a little under one percent of the total. Officially, its 11-month market share through November 2010 is 0.87 percent, Autodata numbers show.

Still, its gains are impressive in a market that still is considered sluggish and unevenly recovering.

Also impressive is Audi's eagerness to credit its 275 American dealers for the pick-up the company currently enjoys. Quoting Chief Operating Officer Mark Del Rosso, the December 3 press release noted prominently that, “these breakthroughs for the Audi brand . . . have resulted from millions of dollars invested by our dealer partners in recent years.”