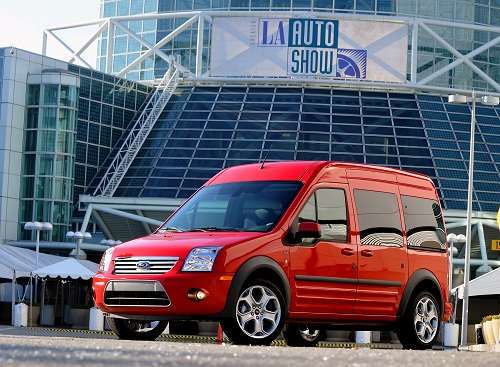 Ford just launched the more comfortable, XLT Premium Wagon version of the Transit Connect work truck. The reason of this launch is because the consumers are finding interesting and innovative ways to tune and customize the vehicle for nomadic activities.
Advertisement

Ford Motor. Co. launched its Transit Connect work van in mid 2009 as a practical and economical hauler for small businesses – a vehicle for tradesmen like plumbers and electricians, for caterers and for local delivery services like florists and dry cleaners. But anyone with a creative eye could see that the Transit Connect work truck held wider promise and possibility. The European-made small truck is a highly functional, customizable, flexible-use vehicle that nomadicly inclined consumers can adopt and adapt for an endless variety of personal uses.

Accordingly, mobile free-spirits are converting the Transit Connect into gaudy, gorgeous hippie vans for our era. To support them, independent aftermarket vehicle-equipment suppliers are bringing out gear for custom conversions that fit the specific needs of ski bums, kayakers, cyclists, campers and other adventure addicts.

Ford formally acknowledged the Transit's unlimited consumer potential this month when it announced the XLT Premium Wagon version. The press release announcing the upgraded model noted that a more comfortable, passenger-friendly Transit Connect is “something customers have been asking for since the small, fuel-efficient van went on sale in the United States.”

The Transit Connect is a high-roofed box with sliding doors on the sides and big-mouth barn doors in back. Slab-sided and square, with a pointy snout, the work truck is designed from the inside out, with the practicality and usefulness of the crate-like interior dictating the model's outside shape. The hauler is functional, rather than svelte, streamlined and pretty. For that reason, some people consider it, well, less than attractive.

I experienced a wide variety of reactions to a test model I drove earlier this fall. My wife said it was ugly. Another woman called it "outright ugly." But at a convenience store, the clerk working the counter was so taken by it that she held me up with questions.

To my eye, the Transit Connect looks pert and purposeful. It is compact and cheerful, but above all it is a blank canvass awaiting some creative brushstrokes. Once an individual model is customized and put to work at a specific task, it should exhibit a distinctive flair that comes from productive activity.

When reviewing the Transit Connect for The Eagle-Tribune Newspaper, North Andover, I spoke with Joseph Cullinan, sales manger at Regan Ford in Haverhill, MA.

“We sold one to one family that has a couple of kids. They do a lot of bicycling and they don't want to carry the bicycles on the roof," Joe told me. “We had somebody who bought one and had it done over to transport a wheelchair in the back. The mother doesn't want to drive a big van around."

Both are worthy uses that will become commonplace. Look for more daring conversions and adaptations of the Transit Connect to come.