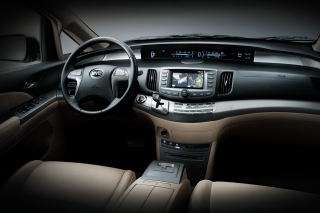 After a one-year delay, upstart Chinese auto company BYD prepares to deliver battery-powered electric cars and buses to southern California. Officials in Los Angeles cozy up to the company, hoping to attract a new tenant to the city.
Advertisement

Rushing to establish itself as a technology leader in battery-run electric cars, the Chinese manufacturer BYD Co. plans to bring up to 50 of its e6 electric-powered, small four-door wagons to the United States by the end of next year, 2011. The vehicles will be used in a demonstration program involving fleet operators in southern California, including the Los Angeles city government.

The City of Los Angeles will host the venture by the seven-year-old car manufacturer, formally called BYD Auto Company Ltd., which will locate its U.S. headquarters in Los Angeles. In addition to operating e6 electric cars, the L.A. municipal government will try out the company's electric transit buses.

That's the information reported in an article first published electronically on Sunday, December 12, 2010, by The Wall Street Journal's online news service WSJ.com. The article was repeated in the print edition of the newspaper the following day. The report was bylined by Journal reporter Norihiko Shirouzo.

BYD is arriving about one year later than the company originally announced at the 2009 North American International Auto Show. The delay was due to product improvements, according to Stella Li, BYD's senior vice president who heads U.S. operations, as quoted in The Wall Street Journal article of December 12 and 13. She told the paper that the company expanded the back seat of the e6. In the earlier version of the car, the batteries stored under the rear seat compromised passenger space size, she explained in the article.

But the Journal also noted that some independent reports attributed the delay to fears at BYD that it would be charged with infringement of patents on battery technology. In the December Wall Street Journal article, Stella Li said she is now unconcerned about patent infringement.

BYD Auto is part of BYD Co., a Chinese manufacturing concern established in 1995 and headquartered in Shenzhen. The company makes such products as cell phones, rechargeable batteries and laptop computers. It entered the automobile business by purchasing China's Tsinchuan Automobile Co. in 2003, renaming it BYD Auto Company.

According to the Wall Street Journal, further negotiations between BYD and the City of Los Angeles may bring a facility to assemble the company's electric-drive transit buses to the city. In the December 12 article, a city official says that the municipality “would be able to buy several thousand electric buses,” in the span of about a decade.

Such a deal could make China's BYD a beneficiary of L.A.'s current money hunt. With Los Angeles politicians committing to spend far more cash than the city takes in, the urban government remains eager to increase the dollars it can claim in taxes. One common way to do that is to expand the population of businesses that bring taxable commerce within city limits. Thus arrangements like the one described in the Journal article are very often quid-pro-quo deals in which the city extends favors to a business that agrees to occupy some urban real estate.

As evidence, the Wall Street Journal brings Los Angeles Deputy Mayor Austin Beutner into its discussion of BYD's business plans. The paper quotes the California politician as saying that L.A. will “put our municipal power to work,” by placing a large enough order to entice the Chinese company to set up shop in the city.