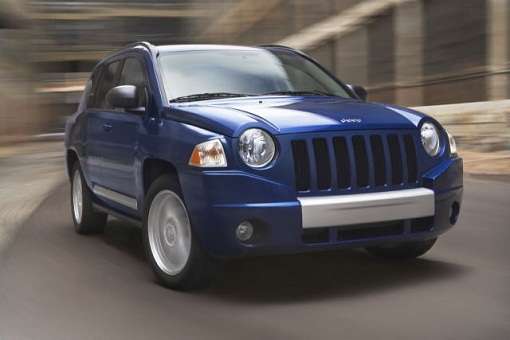 Officially Jeep is mum about future plans. But word has leaked that the upcoming, 2011 Jeep Compass will be restyled to give it more of a Jeep-family look. The move suggests that the brand does not reach far beyond its established fan base, a problem that might mean future trouble.
Advertisement

While 2011 model-year vehicles now abound, and 2010 versions are marked for inventory-reduction sales at dealerships, the 2011 version of the Jeep Compass remains at large. Via e-mail, I asked Chrysler Group's Todd Goyer, head of Jeep brand communication and product planning, about plans for the 2011 Compass. Todd very cordially replied, “we haven't made any announcements about the 2011 Jeep Compass yet. We will soon . . .. Stay tuned.”

Grainy spy photos showing the 2011 Jeep Compass are starting to circulate around the Web. They show a more massive and muscular front end. In a blog, the dealer Landmark Dodge, Chrysler, Jeep of Morrow, GA, near Atlanta, shows spy photos and reports that the upcoming model “has a very compelling resemblance to the 2011 Jeep Grand Cherokee.” (See http://landmarkdodge.com/blog/2010/spy-photos-2011-jeep-compass-like-a-mini-cherokee.)

Recently writing about the Compass in my column in The Eagle-Tribune Newspaper, I quoted Al Knox, general manager of Clark Chrysler Jeep Dodge in Methuen, MA, near Boston. Al told me that the 2011 Compass will look “more along the line of a miniature Grand Cherokee.” He said that “it has the classic Jeep flavor, and will look a little more SUVish than car-like.” (You can read more at http://www.eagletribune.com/business/x970730802/Motor-Mouth-Compass-points-Jeep-in-new-direction.)

A look at the sales performance of the Compass suggests why. Through November 2010, sales of the Compass are up a healthy 43 percent, but the model is still a sluggish performer compared to other Jeep offerings. Cumulative Compass sales of 15,519 units through November amount to fewer than half of the 34,153 Jeep Patriots sold in the same period.

The Patriot is a close cousin to the Compass. Why is it twice as popular? According to Al Knox of Clark Jeep, as quoted in my newspaper column, “the Patriot is attractive to the Jeep buyer because of the classic Jeep look. It harkens back to the days of the squared-off Jeep Cherokee.”

We can conclude that the 2011, more Jeep-like Compass will be more attractive to the Jeep buyer as well.

But the Compass was supposed to start a new direction for Jeep. The brand introduced the nameplate in August 2006 as an '07 model. In September 2008, the headline on a Jeep press release noted that the Compass “takes brand in a new direction.” The write-up stated, “Jeep Compass brings a new sense of adventure to the compact SUV market, combining the packaging and functionality of an SUV with the performance, handling, fuel economy and price of a compact car or small pickup. Compass and its stablemate Patriot are the Jeep brand’s first front-wheel-drive-based products.”

That's a good “new direction.” Compass is a crossover – with SUV attributes built on a passenger car platform – and auto experts everywhere see crossovers as a high-growth segment of the car business. Certainly other auto companies make hay in the compact crossover market. Through November 2010, Toyota sold 153,391 units of its RAV4 compact crossover, close to 10 times the number of Compass sales in that period. Honda did even better, moving 180,587 CR-V compact crossovers.

Jeep's move to restyle the Compass to look more like a traditional Jeep will be welcomed by fans of the brand. But the change can also be read as a failure by Jeep to reach outside that traditional fan base. Sure, a company must keep its loyal friends. But growth – acquiring new friends – is also very important in the competitive and ever-changing car business.