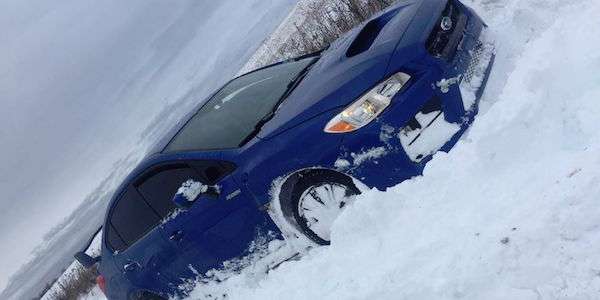 Even though the weather was bleak in Canada this February, sales of the 2017 Subaru WRX STI were hot. Here’s why you won’t find them sitting in the garage this winter.
Advertisement

Subaru Canada announced record sales of the 2017 Subaru WRX STI even with the weather up north being cold and snowy. It’s not a surprise, because the performance model is designed for adverse conditions. The WRX STI is a performance enthusiasts dream supercar for all seasons, and you won’t find it sitting in the garage this winter.

Many people who drive expensive sports cars leave them in the garage this time of year, but not Subaru owners. You will see WRX STIs out in the worst weather having fun. Buyers of the Subaru WRX STI will drive these cars everyday, and then take them up a snowy mountain pass to go skiing on the weekends.

You won't find WRX STI sitting in the garage

It’s a regular site in the North American Rockies. You’ll see a WRX STI driving right along with the other all-wheel-drive SUVs in snowy conditions. But that’s why North Americans buy the WRX STI. I saw one owner of an STI driving his performance car in the fast lane and wasn’t taking it easy in the snow this week. There was six inches of the white stuff that had fallen overnight, and the roads were super slick. But that didn’t deter this performance car owner. He knew how the STI would perform in the slick conditions and drove it to its limit.

You’ll also see many WRX/STI owners with snow boards on top of their performance cars heading west into the mountains during the ski season. Canadian dealers are selling record numbers of the performance sedans to people who want the all-weather capability and performance of the car at altitude. These cars will scream going up the mountain pass at 12,000 feet elevation, making quick work of the thin mountain air with their turbocharged Boxer engines.

The 2017 Subaru WRX STI is the performance enthusiasts dream supercar in adverse weather, and Canada is selling them in record numbers. North American performance enthusiasts will use it as an everyday commuter in all-weather conditions, and especially in the snow. One thing is for sure, the STI won’t be sitting in the garage this winter.