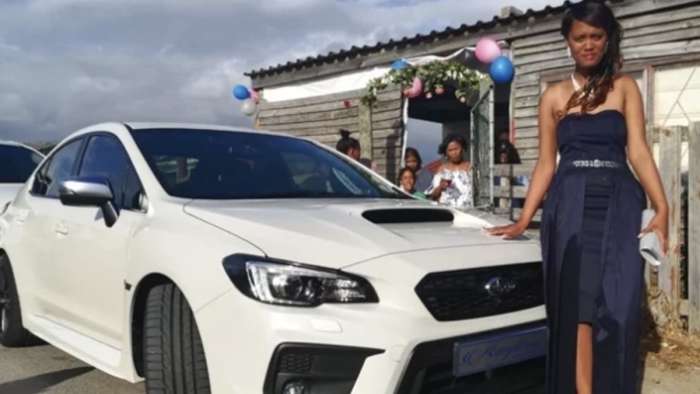 Why Girls Fall Madly In Love With The Hot Subaru WRX

The Subaru WRX sports car is known as a boy racer, but girls love the performance cars too.
Advertisement

The Subaru WRX (World Rally eXperimental) is the name given to the Impreza-based performance car that has a heritage that comes from its Rally racing roots. You’ll find many of the cars driven by guys who love the Boxer rumble and have boosted their cars with aftermarket turbos and added loud exhausts that wake up the neighbors. But the WRX isn’t a car just for guys.

There’s a cool story out of South Africa's Western Cape province about a young girl who fell in love with a new 2019 Subaru WRX. Her name is Raylene Abrahams who lives in a small little town in Ladismith a small farming community. It’s not an affluent country and not a place you would expect to find a shiny new white Subaru WRX.

Raylene just graduated from Rusthof Secondary School and her parents wanted to give her a great send off to the Matric farewell dance. Wheels24 found out about the event and stepped up with the white Subaru WRX that Raylene fell madly in love with. She was chauffeured to the event in the sports car by Wheels24's Janine Van der Post and Raylene shared her experience in this short interview.

What were your first thoughts when you saw the Subaru WRX, the car that would drive you to your Matric Ball?

“I was overwhelmed with emotions because it felt like a dream. My eyes teared up because it was a dream come true.” What were your thoughts when you took a little test drive before you had decided this would be the perfect car for you?

“WOW! I was just so excited and had butterflies floating in my stomach. Driving in the WRX made me feel like a princess.”

So what made you decide this was the car for you? “The WRX is unique to me, and it stands apart from the ordinary. It's just a stunning car and I had never seen one like this before. The gorgeous drone of the vehicle made me crazy. It made me want to drive in it forever. It's so comfortable and drives like a dream. I've always had a sweet spot for fast cars.”

Do you think the car suited your image for the event? “Most definitely, it was as they say in Afrikaans. ‘Dit was mooier as mooi’! Translated into English, means “It was more beautiful than beautiful!”

Raylene Abrahams isn’t the only girl who has fallen madly in love with the 2019 Subaru WRX. You’ll find many women around the globe who own a WRX who love the performance of the sports car and choose it over driving a boring economy car or small crossover. When you see a Subaru WRX driving next to you, give a thumbs up to the female owners who have fallen madly in love with their performance car.

Reader Poll: How many of our female readers own a WRX and why did you fall in love with it?