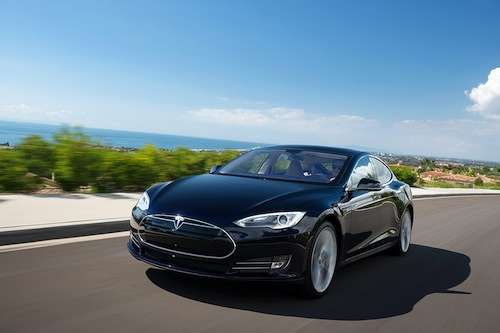 See Tesla Models S get a battery swap in an amazing 90 seconds! It can be done twice as fast as filling up with a tank of gas.
Advertisement

Tesla CEO Elon Musk wants to convince people that are sceptical about electric vehicles, that they are the future. He may have gone a long way last night in doing just that. In a demonstration that took place at the Tesla Design Studio in Los Angeles, he showed that it can be done faster than filling an Audi up with a tank of gas. And the driver doesn’t ever have to get out of the vehicle. Very impressive. In fact, Musk showed that two Tesla Model S cars could have their batteries swapped out in the time it took to fill up one car with gas at the fastest station in LA. Are you convinced yet?

The choice is faster or free

Musk said last night that at these new “Tesla Stations” the driver will have the choice of using a Supercharge that will be free, or have the choice of a battery pack swap which is “faster than you can fill a gas tank.” So the decision the driver makes is does he or she prefer “faster or free.” Sounds like the driver wins either way doesn’t it? The Supercharging of the battery will be totally free and the fully charged battery pack replacement will cost the Model S owner about the same as a tank of gas.

At the Tesla Station owners drive over the marked spot and just sit in the car as the automated machine emerges from the station in the ground and swaps the battery with a fully charged one. And for added convenience, Tesla will bill the owner’s credit card for the battery-swap visit. According to Musk, the battery-swapping service will cost between $60 and $80 which is about the same as filling up with 15 gallons of gasoline in California.

There is one condition owners must meet. They must swap back their original battery (which will be stored at the station) on the return trip or they will face paying the difference in cost. Each battery will have a warranty available on the replacement pack depending on its condition. The warranty is the balance of the standard 8-year term, dependent on the age of the pack received.

Will this new Tesla battery swap station really work? Each station will cost Tesla close to a half-a-million dollars to build next to their Supercharger locations. We already saw the recent bankruptcy of Project Better Place who had a similar idea of such a system. Musk wants us to believe that electric cars are the future. If Tesla can pull it off, he just may be right. The new Tesla Stations will initially be launched in busy Tesla areas, like the I5 corridor in California and between Boston and Washington, DC. Are you convinced by Musk?

And see how the battery swap could work now after the arrival of Tesla's million-mile batteries.