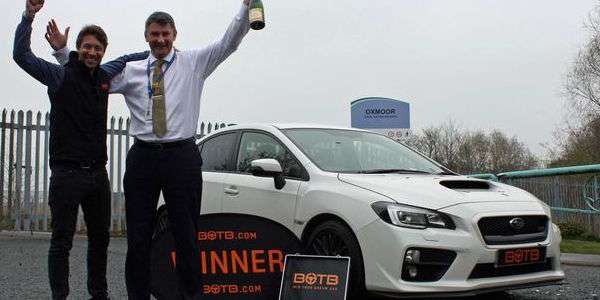 Watch as an airplane worker in the UK wins a new 2016 Subaru WRX STI.
Advertisement

If you live in the UK, you can register online to win a free car at Best of the Best (BOTB). The latest winner, Richard Howe, won a new 2016 Subaru WRX STI plus 10,000 cash (British Pounds). The airplane landing gear worker was interrupted at his job in the middle of a conference call as BOTB’s Christian surprised him with the performance car.

It was Richard’s lucky day

The 2016 Subaru WRX STI performance sedan was just recently added to the lineup of 180 plus cars that contestants can choose from. Richard Howe bought tickets and picked the WRX STI as his dream car from the list. It was Richard’s lucky day as he became BOTB’s 313th Dream Car winner.

Richard told BOTB that he had just moved from the city to the countryside and wanted the new WRX STI because of its performance and its all-wheel-drive. Richard told BOTB, “We’re looking at new cars at the minute, as we live in the country we need something bigger, so this is the perfect car for me to have to run to work in!”

When the Subaru WRX STI was added to the car list, Howe knew he wanted this sports car. He said, “About 20 years ago I went for a ride in an STI, and I just fell in love then and there. It was an imported one, with the exhaust of dreams. I think the sound of the car is one of the reasons I chose the car.”

At BOTB, there’s a Dream Car winner every week. Competitions run from midnight until midnight in the UK, Monday to Sunday, 52 weeks a year. Judging takes place on a Monday morning and the winner is surprised in person by BOTB Founder and CEO William Hindmarch on Tuesday. Best of the Best has given away cars worth over 18 million British Pounds since it was founded in 1999.

Watch the video below as Richard Howe was interrupted at work in the middle of a conference call. Howe tells his caller he needs to go fast. He was surprised for sure as BOTB’s Christian walked in his office and told him he was the winner of a new 2016 Subaru WRX STI.

Elon Makes a Cybertruck Statement With an Action, But Quiet in Words
Tesla's Record Month in China: Doubled Registrations in March 2021
END_OF_DOCUMENT_TOKEN_TO_BE_REPLACED