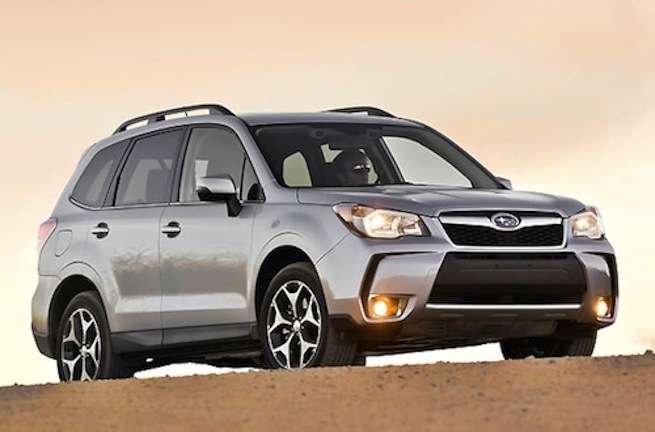 USA TODAY surprised by the all new 2014 Subaru Forester

The all-new 2014 Subaru Forester is getting noticed by USA TODAY and the news outlet says the new SUV is “top-notch.”
Advertisement

The 2014 Subaru Forester is “top-notch” according to USA TODAY but they are surprised by the new crossover from Subaru. After a test drive of the newly redesigned Forester, USA TODAY can’t believe that Subaru is doing so well with buyers. They seem to admit that Subaru has been putting out quality cars that are also safe, but call them “odd.” The mainstream media hasn’t been paying attention to Subaru and the small Japanese automaker appears like an overnight success.

If they would have been paying attention, they would have seen that Subaru’s stock has skyrocketed fivefold since the beginning of 2012. Profits and sales of the niche automaker have been seeing records broken every month for the last few years. Consumers around the globe are waiting month’s to buy the popular new BRZ sports car that was introduced last year. This is all because Subaru has a great plan.

Subaru is producing a product that used to be only for a select niche market, but in recent years, they’ve gone mainstream with cars like the Legacy sedan. They are appealing to a whole new generation of buyers who never purchased a Subaru before. The Forester is another example of what Subaru is doing to attract new buyers.

Subaru is making cars that are a little more expensive than the competition and they are making them well. The all-new 2014 Forester is the only small SUV on the planet that aced the challenging small overlap front crash test conducted by the IIHS. It helped the new SUV to be awarded a Top Safety Pick+ (TSP+) award from the Insurance Institute for Highway Safety (IIHS). The Forester is not new to high safety standards. When the Institute first rated small SUVs for side protection in 2003, the Subaru model performed the best and was one of only two vehicles to earn good ratings.

What seems like an overnight success has been coming from years of building good vehicles that meet a specific need for consumers. USA TODAY says the new Forester is “dowdy-looking.” What they don’t realize is that the new styling serves a very important purpose. While other automakers are designing SUVs that look like sport coupes, Subaru has bucked the trend and kept the more traditional design to give consumers a crossover with features like good visibility, cargo carrying ability and versatility.

The revamped 2014 mid-size SUV recently won praise from Consumer Reports for “space- efficient design, large windows, and big square doors.” Those and other features helped it outscore the new Ford Escape, Honda CR-V, Toyota RAV4 and Mazda’s CX-5. All are the result of sticking to their core values that have made them successful. So what USA TODAY calls “dowdy-looking” is why consumers are flocking to the brand.

Maybe USA TODAY should stick to reporting news instead of reporting on and test driving vehicles. Consumers are savvy and know a good product when they see it. The all-new 2014 Subaru Forester is successful because Subaru re-designed it to be. They are engineering quality automobiles and staying true to their core values. They have done a great job of marketing to their key customers and are appealing to a new generation of buyers. It’s a formula for success that is paying off big for Subaru.