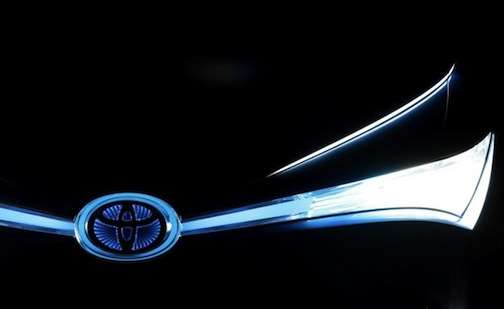 Toyota rolls out another Hybrid concept ahead of Beijing

Prior to its debut at this year’s Auto Show in Beijing China, Toyota has given us some teasers in advance of the unveiling of their new hybrid concept. With the price of gasoline continuing to increase, and the report that sales of hybrid cars grew significantly in the U.S. last month, Toyota is introducing the new concept at a good time.

Toyota is still entrenched in the top spot with the Prius having a stronghold on the North American market representing more than half of all hybrid sales in March with 27,800 units sold. The next most popular hybrid, the Toyota Camry sold 5,404 units giving the Prius five times the number of sales.

Toyota announced recently its new framework called New Global Architecture in hopes to develop multiple models simultaneously to boost the quantity of common parts used across its vehicles. The NS4 plug-in Hybrid that made its debut in Detroit, is a mid-size concept that Toyota developed for potential global market introduction by 2015.

This new hybrid concept being unveiled in China is another hint that Toyota believes the future is bright for the hybrid market. The Japanese automaker also showed off a FT-Bh Concept in Geneva back in March. The Toyota FT-Bh Concept could be powered by compressed natural or could also take the form of a plug-in hybrid, and Toyota said it would achieve an average of 134.5 mpg. The FT-Bh Concept, which looks like a baby Prius, weighs just 1,733 pounds.

Toyota normally associates the popular blue shade with its hybrid vehicles and that hints that the upcoming concept will either be a hybrid or electric vehicle. Auto Guide reports that it’s believed to be a hybrid created in China specifically for the expanding Chinese market.

Toyota’s recent concepts signal a new styling direction for the Japanese brand which they say are “aimed at creating an emotional connection with consumers”. Toyota is making a big statement to the rest of the automotive world by contiuing to unveil new concepts and technologies.