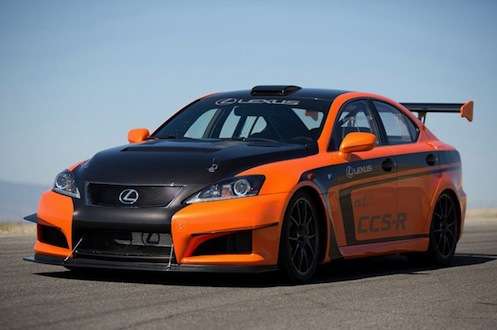 The Lexus IS F CCS-R and Toyota electric TMG EV P002 will compete in the Pikes Peak International Hill Climb on July 8, 2012.
Advertisement

With the Pike’s Peak International Hill Climb approaching, Toyota has announced they will be bringing two very different cars to the race this year, a record-setting electric car, and the Lexus IS F CCS-R race car. On July 8, the two race cars from Toyota will go against the challenging mountain.

The race is run on a 12.42 mile course with 156 turns that begins at 9,390 feet and finishes at the 14,110 foot summit of Pikes Peak. The mountain brings challenges like no other road race in the world. The rarified air robs 30 percent of an engines power at the summit, and slows the drivers reflexes and saps muscle strength during the climb. Drivers and their vehicles must both be in top shape just to finish the grueling race.

Lexus brings the race-ready IS F

The Lexus IS F CCS-R isn’t an ordinary car, but Pike’s Peak isn’t just an ordinary mountain. The IS F CCS-R was first introduced at the 2010 Tokyo Auto Show and is out to prove that it’s more than just a show car. The race car has been totally modified and as you can imagine, there isn’t much left of the original car. It starts under the black and orange paint on the hood with the same 5.0-liter V-8 as the standard IS F production car.

But the front engine IS F CCS-R race car pumps out 416-horsepower along with 371 lb-ft of torque sent to the rear wheels. The engine uses SFI D-4 direct-to-cylinder injection with secondary port injectors. Power is sent to the rear wheels via an 8-speed Sport Direct Shift automatic with paddle shift and manual mode.

The Lexus IS F CCS-R is also equipped with other 14,000-foot fighting features like high-performance racing brakes with cooling system, a fully modified race suspension, and engine, transmission and differential oil coolers. The 18-inch racing wheels are shod with special Yokohama /ADVAN NEOVA A050 tires front and rear.

In order to strip down the car to reduce weight, underneath the black and orange paint hides extensive carbon fiber bodywork along with door handles and lightweight doors. Inside, the IS F CCS-R race car uses polycarbonate windows, a carbon-fiber dashboard and center console to reduce weight even further. In total, it weighs in at 3,087 lbs, which is 693 fewer than the production version.

The huge advantage that an electric race car has over its internal combustion competitors, is the car won’t be affected by the altitude. TMG’s high-performance electric powertrain maintains full power despite the thin atmosphere. And the number of electric vehicles is growing every year. This will be Toyota’s first trip to Pikes Peak with the TMG EV P002, but the car has been on the race track before this. Last year the car set the lap record for an electric race car at the Nurburgring.

Since the record-setting lap, Toyota’s advanced electric and electronic department has updated the electric powertrain, which now puts out 469 horsepower and 664 pound-feet of torque making it more powerful than its predecessor. The electric car is expected to run at a top speed of 149 mph with the new modifications.

The Toyota TMG EV P002 will be going against the reigning unlimited class champion Monster Tajima and his Monster Sport E Runner to race in the electric division at Pikes Peak. Mitsubishi will be bringing their I-MiEV Evolution and BMW their 1995 M3 built by EV West.

The Lexus IS F CCS-R and the Toyota TMG EV P002 will need every advantage they can get going against some of the world’s best competition in America’s second oldest motor sports race. The Pike’s Peak Hill Climb was first run in 1916 and this year marks the 90th running of the "Race to the Clouds."

This year, the race will take place on Sunday, July 8 with race related events all week long. Fan Fest, on Friday, July 6 in downtown Colorado Springs, will feature motorcycle jumpers, two beer gardens, a chili cook-off, live bands and the Denver Bronco Cheerleaders will be on hand. 35,000 spectators are expected to attend the famous event.

Check out the high-performance Toyota TMG EV P002 video below.