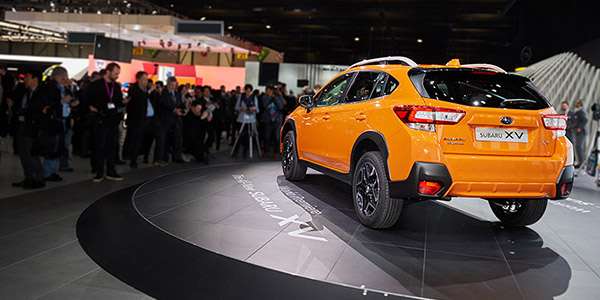 3 Core Values Characterize the All-New Subaru Crosstrek; It’s Why the Brand is Hot and Getting Hotter

There’s 3 core values that characterize the new-generation 2018 Subaru Crosstrek. It’s why the brand is hot and getting hotter.
Advertisement

At the 2018 Subaru Crosstrek reveal in Geneva, Subaru Boss Yasuyuki Yoshinaga talked about 3 core values that characterize the new crossover. Subaru is focused on safety with their new all-wheel-drive Crosstrek, and there are two other areas of focus for the small Japanese automaker. Safety is a core value that the Subaru brand values highly along with their unique all-wheel-drive vehicles being fun-to-drive, they are tough, and last longer. It’s what sets their vehicles apart, and could be why they keep setting new sales records.

Yasuyuki Yoshinaga, President and CEO of Fuji Heavy Industries, parent company of Subaru, says safety is Subaru’s most important core value. The Subaru EyeSight driver assist system is at the core of their safety technologies. Along with their unique Symmetrical all-wheel-drive system, EyeSight is another big advancement in technology for the brand. They developed the first EyeSight system in 1999, and in 2008 it was the first system to use stereo camera technology to detect vehicles, pedestrians and cyclists. The Subaru boss says in Europe, 94 percent of Outback owners with EyeSight, said they felt safer when driving, and 25 percent reported the system avoided at least one accident.

Not only does Subaru want you to feel safe when driving their vehicles, they want consumers to have fun driving them. Fun can be translated in different ways, but a new generation of crossover buyers are using Crosstrek for more than a grocery-hauler. They use their CUV for outdoor adventures, and they take their Subaru WRX STI performance sedan and BRZ sports coupe to the track on weekends. Yoshinaga says, “Subaru drivers don’t simply buy our cars, they own them.”

Surveys in different markets around the globe show that 96 percent of Subaru vehicles registered in the last 10 years are still on the road. The Subaru boss says their ambition is to also grow awareness that Subaru vehicles are tough and last longer. Subaru has done the best job of any automaker at creating a loyal group of followers, and they tend to keep their vehicles longer. They drive them for years, and then pass them down to younger members in the family. Yoshinaga goes on to say, “Our customers know they have chosen a car that looks like no other, feels like no other ,and drives like no other. And they tend to keep it for long time.” More on Page 2.

Subaru’s Crosstrek is now the brands number three volume model in their lineup behind Outback and Forester. Yoshinaga points out, these three models alone made up 70 percent of their global sales and 80 percent of sales in Europe. Subaru’s core values of safety, fun-to-drive and tough seems to be working. It’s the formula that characterizes the new-generation 2018 Subaru Crosstrek, and entire lineup of Subaru vehicles. It’s why the brand is hot and getting hotter.