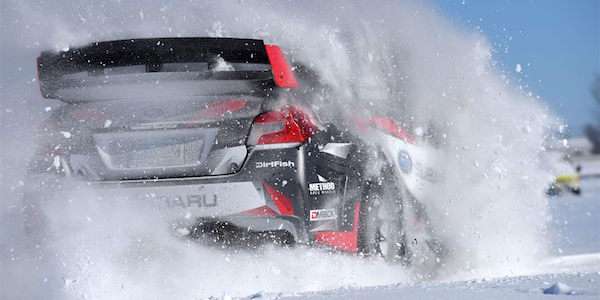 It was a “rugged and challenging” snow rally event in the cold northern Quebec Forest. David Higgins beat both Travis Pastrana and Antoine L’Estage to take round one of the newly-formed ARA Championship at the Rallye Perce-Neige in Canada.

The snow started falling as the sun went down and turned intense while racers were on some of the longest stages found at any rally race in North America. There was adversity and mistakes made in the frigid temperatures that were well below zero.

This was David Higgins and Craig Drew’s first snow event in two years. They took an early lead in their new 2017 #75 Subaru WRX STI, but experienced problems including a headlight and hood latching issue, which eventually failed after clipping an icy snow chunk. “I drove slow to keep the hood down. It was a challenge but it was all good in the end!”, stated David Higgins at the finish.

Travis Pastrana made some mistakes at the beginning of the race but kept his #199 WRX STI on course to finish second behind his teammate. After the event, Pastrana said, “I made some mistakes in the beginning. I think we made some wrong tire choices, but at the end of the day I had an awesome day and our notes were good and Robbie was awesome. All the work we put in off-season has helped. We have a little more to do now!”

Antoine L’Estage, who is Subaru Rally Team Canada’s rally champion, and the toughest competition, had mechanical issues with his WRX STI rally car. He and co-driver Alan Ockwell had problems with the #1 Subaru WRX STI on the second loop when they only had power to the rear wheels most of the time.

It was an intense day with super cold temperatures and blinding snow, but SRT USA finishes 1-2 with Higgins driving his #75 2017 Subaru WRX STI to victory in round one of the ARA Championship. “It was like a video game where you are in a trance going 120 mph. You don’t see anything. All you see are trees coming at you really fast!” says, Travis Pastrana.