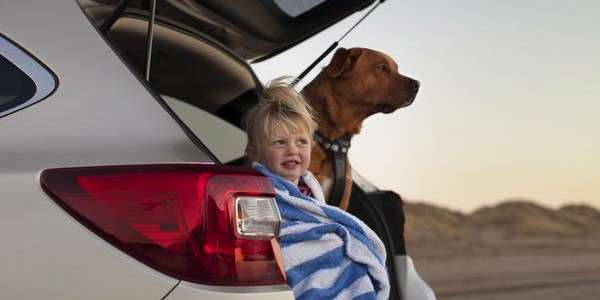 Is Subaru more concerned about your dog than they are your children? [video]

Subaru continues its support of pet safety through its partnership with the Center for Pet Safety. Why do they put such emphasis on pet safety in their vehicles?
Advertisement

Subaru and the Center for Pet Safety (CPS) have been in partnership since 2013 when the automaker began funding the research that went into the testing of pet car safety restraints. Now they will begin funding more testing that will go into testing the structural integrity of pet crates and carriers.

Why is Subaru concerned about your pet?

The Japanese automaker knows that many of their loyal Subaru owners have pets and they want to reach out to this group. It’s really a brilliant marketing move as it helps the brand connect with this large group of their buyers. Michael McHale, Subaru's director of corporate communications says, “Pet safety is very important to Subaru as more than half of Subaru drivers are pet owners, with over 69 percent of them owning at least one dog. We feel a sense of responsibility to inform pet parents of safety measures they can take.”

Subaru recognizes that their owners love dogs and they take them along on family trips. Because so many Subaru owners own dogs, they naturally take them along while traveling in the car. Subaru owners lead active lifestyles and their multi-purpose vehicles have always lent itself to taking the family dog along on camping and hiking trips on the weekends.

A pilot study was initially done by the Center and they found that the majority of pet safety restraints currently on the market do not provide acceptable protection in a crash situation. Subaru is putting efforts into keeping current customers happy and also gaining new ones who love their dogs...read more.

The research shows there are major safety risks for pets

Subaru says 56 percent of American pet owners take their pets in the car, and one in five admit to traveling with a pet in their lap. Subaru believes they have a responsibility to their owners with pets and to make them aware of the safety risks. To help promote the safety of these furry family members, Subaru will now begin funding CPS’s testing of pet crates and small carriers in crash situations.

Subaru does cares about your children

While it may seem that Subaru cares more about your dog then they do your children, the Japanese automaker is the leader in vehicle safety for its occupants. Subaru has more 2015 IIHS Top Safety Pick awards than any other brand. Subaru is the only manufacturer with IIHS Top Safety Picks for all models for five consecutive years (2010-2014). Subaru has been concerned about safety in their vehicles since the 1960s when they conducted their own tests before there were any official tests being done.

Subaru has the goal of being the overall safety leader in the world and they care about all their vehicles occupants including the family pet. It’s a good marketing move by the automaker as so many of Subaru owners have pets who travel in the Subaru vehicle with their “pet parents.” Now the pets will be as safe as the kids.