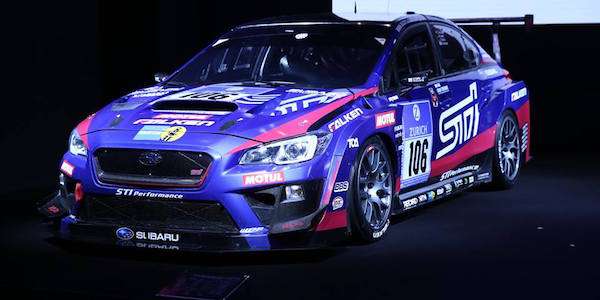 President of Subaru Tecnica International (STI), Yoshio Hirasawa, gave an overview of Subaru Motorsport activities for 2017. What’s new in 2017? Here’s what’s coming in three global motorsports activities that Subaru is involved in. Torque News will be covering these events extensively again this season.

Subaru will be involved in the Nurburgring 24-hr race and will try to achieve a third consecutive win this year to chalk up its fifth class victory. The grueling 24-hour race will take place in Germany on May 25-28, and STI will compete in the event for the tenth consecutive year with a Subaru WRX STI. STI has won the SP3T class (for sub-2 liter turbocharged vehicles) four times, in 2011, 2012, 2015, and 2016. Can they achieve a third consecutive win this year?

Hideharu Tatsumi of STI will again be team manager, while team operations will be managed by R&D Sport (President Shinji Motojima; located in Hiratsuka, Kanagawa). The drivers will again be Takuto Iguchi and Hideki Yamauchi.

The big news for Subaru’s 2017 motorsports season, is Patrick Sandell has been added as a driver for the Subaru WRX STI GRC supercar. He makes the change from driving the Ford Fiesta ST for the Bryan Herta Rallysport team to Subaru Subaru Rally Team USA. Chris Atkinson will also be on board for the full season as the second driver for Red Bull Global Rallycross. Subaru says they will also explore opportunities to enter Higgins or Pastrana in select GRC rounds in 2017. More on Page 2.

The 2017 Subaru WRX STI GRC cars get the new body style just revealed by Subaru with a new front facia. Vermont SportsCar, located in Colchester, VT, manages the cars for Subaru and is focusing on a total redevelopment of the next-generation of Rallycross cars during this off season. The development team says they are taking a fresh look at everything, and the car gets a total redesign. It’s getting an updated engine package, and new geometry in the suspension.